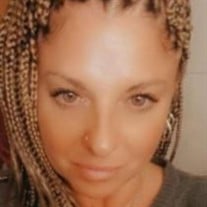 UTICA - Nacole L. "Nikki" Rios, 43, of Utica, NY was called home to be reunited with her son when she passed away unexpectedly at her home on Wednesday, April 13, 2022. Born in New Hartford, NY on August 20, 1978, Nikki was the daughter of Melito Rios Sr. and Lucy Talerico. Nikki was a loving mother to her three sons, the late Terrence C. Coleman III, Ontonio “Chico” Coleman, and Romany “RoRo” Coleman. Nikki also shared a committed motherly bond with her honorary son, Rumar Green. Raised locally and educated in the Utica City School District, Nikki was a graduate of Thomas R. Proctor H.S., Class of 1998. Nikki entered the work force at the age of fourteen, working various jobs until she found her passion for nursing. She enjoyed caring for people, especially the elderly. Nikki became a Certified Nursing Assistant but was determined to advance her career, and to achieve that goal, she attended the Madison-Oneida County BOCES where she was a 2001 graduate of the Licensed Practical Nurse (LPN) program. Nikki spent several years working for the Masonic Care Community of Utica, NY and The Grand Rehabilitation and Nursing Home of Utica. Nikki was an all-around sports mom who dedicated years to practices and travel, for the many sports played by her three children. Coming from a significant size family, she looked forward to weekly family dinners with an outlined menu for who was to cook what. She enjoyed movie nights and sleepovers with her cousins, nieces, and nephews. Nikki loved travel, especially road trips with family but had no problem taking a long drive alone. She loved to gamble and play BINGO at the Turning Stone Casino which became a routine date night with her fiancé, Chupe. Nikki loved her self-care and always pampering herself with bi-weekly trips to the hair and nail salon(s). Nikki was known for ignoring text messages and phone calls but would be posting on social media at the same time. She was known as the “selfie queen”…She loved family celebrations as she was sure to be the “life of the party”. Nikki dedicated her life to her children, from working long hours, to putting their needs and happiness before her own. On October 13, 2021 her life changed forever the moment she learned of her son Tre’s death, from unknown answers. Nikki struggled from hour to hour, day to day to find her way back to living a life her son would have wanted, a life dedicated to his daughter Leilani as she did for him. God knew her “Broken Heart” and replaced her hurt and pain and called her home to reunite with her son. We loved her “mucho mucho” but God loved her more! Nikki is survived by her fiancé Vince “Chupe” Diaz; her beloved sons, Ontonio “Chico” Coleman, and Romany “RoRo” Coleman; honorary son, Rumar Green; her precious granddaughter, Leilani Coleman; her parents, Melito Rios and Lucy Talerico; her siblings, Melito McConkey, Ricky Raymond, Angela Rios (Gavin), Savanna Goico, Pablo Goico, Melito Rios Jr.; and an honorary sister, Antonia Bell; and her paternal grandmother, Gloria Rios. She loved immensely and respected her godparents, Victor Talerico and Carol Talerico; and godsister, Shanté Washington; She also leaves many aunts, uncles, and cousins, holding a special rapport with cousins Heather, Mikey, Toni, Gloria, and Chano. Nikki loved her many nieces and nephews with a fond regard to Samarah, Gavin Jr.”Pop-pop”, Ayanna, Maraye, Antoinique “NuNu”, Pablo, KaMiah, and Karmello; and friends, Chantel Brooks, Amanda Feliciano, and Alicia Purpura solid BFF’s – never to be forgotten! She will be missed by her most loyal companion, Mama’s. Since a very young age, Nikki shared an extraordinary sibling bond with her cousin Jennifer Crawford and her husband Michael Crawford whom she referred to as her older sister and brother, and always aunt Jenn and uncle Mike to her children. She was predeceased by her beloved son, Terrence “Tre’” C. Coleman III; paternal grandfather, Julio Rios Sr.; maternal grandparents, Dominick and Laura “Gram” Talerico; and aunts, MaryAnn Terrell and Lisa Pagan. Visitation will be held on Saturday, April 23, 2022 from 3:00-5:00 pm. Nikki’s funeral service and Celebration of Life will commence at 5:00 pm immediately following the conclusion of visitation. Arrangements have been entrusted to Eannace Funeral Home, 932 South St., Utica, NY 13501.

UTICA - Nacole L. "Nikki" Rios, 43, of Utica, NY was called home to be reunited with her son when she passed away unexpectedly at her home on Wednesday, April 13, 2022. Born in New Hartford, NY on August 20, 1978, Nikki was the daughter of... View Obituary & Service Information

The family of Nacole L. "Nikki" Rios created this Life Tributes page to make it easy to share your memories.

Send flowers to the Rios family.