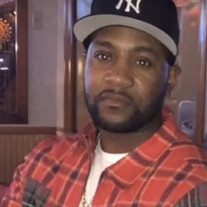 UTICA - Mr. Molik F. “Mo” Liggins, age 35, unexpectedly passed away on Friday, August 14, 2020. At the time of his passing, God embraced him and took him home to be with those who went before him. Born in New Hartford on November 29, 1984, Molik was the son of Dorothy Liggins and the late Jimmy Reese. He was a graduate of T.R. Proctor High School/Class of 2002. He was blessed with a beloved son, Molik “Soly” Liggins. The past 7 years he has spent with Theresa Tripoli, and through their close bond they brought out the best in each other. At one time, Mo was employed by the TECT Power Engineering Company in Whitesboro in the Metal Forging/shaping Department. Mo was a loyal, generous soul and a stand-up guy who always kept his word. The youngest of 7 children, his passing is devastating to each of his siblings. He loved his “Mau” and he would do anything for her. He was an animated dad who spoiled his son “Soly”, but taught him respect, as well. He strived to provide for him, because his son was his number one priority. Father and son often enjoyed the challenge in playing the NBA 2K20 basketball video game. He bought his son a dirt bike and was so proud to watch him move on to the next step in mastering it. Mo generally listened to rap music, especially Lloyd Banks. He also took an interest in TV mini-series, including Yellowstone, Big Bang Theory, and any crime documentaries. He worked out at the Fitness Mill and at the New Hartford Town Park with a concentration on calisthenics to increase body fitness. He was very disciplined when it came to maintaining a strong and healthy body, and he would encourage friends and family to follow his lead in physical conditioning. Mo was a fan of the Detroit Pistons. He loved the game, and at one time he played in tournaments. It was a sport that his older brother Damian introduced to his little brother Mo when he invited him to join in a basketball game, years ago, in their neighborhood Cornhill Parks. Molik is survived by his ‘Mau’, Dorothy; his son, Molik F. “Soly” Liggins, Jr. and his mother, Caress McClain; his siblings, Tammy Liggins, Terrance “Bernard” Liggins, Lisa Pittman, Damian Liggins and Nicole “Noble” Taylor, Taka Reese, Shambrich Liggins, and Shane Reese; and his partner in life, and his everything, Theresa Tripoli. He also leaves his aunt, Ruthie Liggins; and his nieces, nephews, great-nieces, great-nephews, and cousins, especially Gary Liggins, Cymil Hamilton, Jeff Jones, Brandan Liggins, and Antwuan March. He was predeceased by his maternal grandma, Tressie Liggins; and his uncles, Willie “Murray” Liggins, Willie “Frank” Liggins, Tommy Liggins, and Eddie Brown, Jr. His friends were numerous and had their roots in grade school. Mo was always there for them, and he was always a mediator. They will long remember their loyal friend, and the brotherly influence he had on their lives. The family will honor and commemorate Molik’s life at a private time. All funeral services will be held privately and at the convenience of the family. Please take a moment to connect with Molik’s family through the “Memories” section of his obituary. Our prayers go out to all as a sign of our continued support.

UTICA - Mr. Molik F. &#8220;Mo&#8221; Liggins, age 35, unexpectedly passed away on Friday, August 14, 2020. At the time of his passing, God embraced him and took him home to be with those who went before him. Born in New Hartford on November... View Obituary & Service Information

The family of Mr. Molik F. "Mo" Liggins created this Life Tributes page to make it easy to share your memories.

Send flowers to the Liggins family.