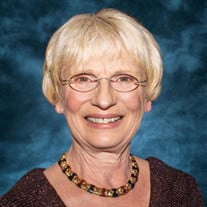 NEW HARTFORD - Mrs. Mirella (Paoletti) Longeretta, age 79, passed away peacefully on Thursday, December 31, 2020 at MVHS at St. Luke’s Healthcare, after a brief illness. Born in Trieste, Italy on May 25, 1941, Mirella was the daughter of the late Giuseppe and Antonia (Ribarich) Paoletti. As a teenager, she and her family immigrated to the United States and settled in Utica where she received her education. She was a graduate of Utica Catholic Academy and furthered her studies at the Utica School of Commerce. On October 12, 1963 she married John A. Longeretta, Esq. with whom she shared 56 blessed years in a devoted and loving union. A woman of natural beauty, grace, and style, Mirella worked as a model for the Celia Jones Agency modeling at the Boston Store, Hotel Utica, and various clothiers. In 1960, she had the honor of being chosen as one of the “Kennedy Girls”, a group of a dozen local models who escorted JFK, then presidential nominee, into the rear of the auditorium during a stop on his campaign. Mirella’s next venture in the workforce made her equally as proud when she successfully completed training and accepted a position as a stewardess for Mohawk Airlines, a vocation for which she was well-suited. Among her many attributes was her skill as a seamstress. She made everything from her own wedding gown and articles of clothing, to Halloween costumes for the kids. Mirella was an absolutely wonderful cook, and her culinary talent in the kitchen was known by all friends, family, visitors, and loved ones. She prepared some of the best Italian food imaginable. Her cooking was so well known by several contractors that whenever work needed to be done around the house, the tradesmen were so pleased to know that Mirella would cook lunches for the entire crew. There were times Mirella’s late husband, John, would be upset because the contractors would come to the house just for more of Mirella’s cooking, even after the jobs were completed! Many friendships were developed because of her wanting to cook for the workers at their home. Mirella was also very charitable, a stewardess of God. She grew up with very little in terms of the bare essentials and was not unfamiliar with the feeling of being hungry, especially after her father died. She often spoke of needing to go to the local Soup Kitchen for meals because her mother and siblings did not have food. When Mirella came to this country, and married John, who was a wonderful provider, she never went without. She also never forgot her days in Trieste when she lived in a single room apartment with her young widowed mother and her sisters and brother, yet always donated to charities and individuals on a very regular basis, though it was always anonymous without ever wanting recognition. She tried to help any and all that were in need, and she taught her children to have the same compassion and empathy, because helping others from going hungry is the right thing to do. When she was unable to drive, her son John would bring her to local charities and churches so she could make her donations anonymously. He would ask, “Mom, don’t you want some kind of a receipt for tax purposes for all you donate?” Humble and unpretentious, she would reply “That’s not important. What’s important is that someone will not go hungry today.” Mirella was a communicant of St. Mary of Mt. Carmel/Blessed Sacrament Parish and lived her Catholic creed through example. Mirella is survived by her children and their spouses, John J. and Lisa R. Longeretta, Paul M., Esq. and Laura Longeretta, David A., Esq. and Renee Longeretta, and Dr. Andria M. and Dr. Dimitrios Theoharidis; her grandchildren, Maria L., and John A. Longeretta; Samuel S. Longeretta; Briana Vellone; and Damian, Ekaterina, and Arianna Theoharidis. She also leaves her nieces and nephews, especially acknowledging Alida and Robert Lubeck, Roberto Sorini, and Andrea Sorini; great-nieces and great-nephews, with mention of Marisa Lubeck and Brian Donaldson; cousins, and her two caring and loving friends, Gianna Bevivino, and Maria Centolella. She was predeceased by her siblings and their spouses, Nives and Luciano Petrinci; Silvano and Teresa Pauletich, and Marta and Lucio Sorini The family will honor and commemorate Mirella’s life at a private time. Expressions of sympathy in the form of donations may be made to the Stevens-Swan Human Society online at https://stevens-swan.org or by mail to 5664 Horatio St., Utica, NY 13502, or help the less fortunate by donating to the Historic Old St. John’s Food Pantry in her name, online at https://historicoldstjohnschurch.weshareonline.org or by mail to 240 Bleecker St., Utica, NY 13501. During this time of social distancing that we are all experiencing, please take a moment to connect with Mirella’s family through the “Memories” section of her obituary. Our prayers go out to all as a sign of our continued support.

The family of Mrs. Mirella (Paoletti) Longeretta created this Life Tributes page to make it easy to share your memories.

Send flowers to the Longeretta family.