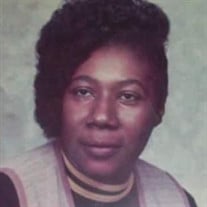 UTICA – Mrs. Mildred Louise “Millie” (Gibbs) Parrish, age 83, passed away peacefully on Friday morning, January 7, 2022, with her loving family by her side. Mildred was born on January 25, 1938 in White Oak, GA, to the late Eugene and Lottie Mae (Walker) Gibbs. There Mildred attended local schools, going on to graduate from Ralph J. Bunche High School. Mildred married Nathaniel Parrish in July of 1954, and together the couple shared in a loving union blessed with four children. In 1959, the pair decided to relocate to Utica, which became their new home and where Mildred would remain for the rest of her life. Tragically, Nathaniel passed away in 1964 – ten years into their marriage. Upon her husband’s death, Mildred channeled her inner strength, choosing independence for herself in order to raise their four children with her full dedication. Though she was widowed at 25, Mildred’s strength was not diminished. A hard worker, she always made sure to provide for her family. There was nothing Mildred received that she did not earn. She bore the uncanny ability to persevere despite any obstacle, and yet was not hardened by her suffering. Indeed, she was well-liked and well-loved, often affectionately known as “Millie.” Other fond nicknames for Mildred included: “Milli Vanilli,” “The Warden,” and “Gram.” Mildred’s career began with her employment at the General Electric Radio Receiver Plant on Bleecker Street, where she held a long-time position. Eventually, she would shift to working from the location on French Road. After her time with GE, Mildred gained employment at Oneida Ltd., where she worked as an assembler until her retirement. Following her retirement, Mildred offered her time and her heart to a highly worthy cause and became a foster parent. When she was not working or caring for those dependent upon her, Mildred passed her free time doing her favorite hobbies: fishing and playing bingo. She greatly enjoyed both. Mildred was of the Baptist Faith. Mildred is survived by her beloved daughters, Patricia Jackson and her late husband Dennis, who passed away on April 24, 2020, Angela and her husband Eugene Walker, and Deborah Montanez; as well as by her son, Reginald and his wife Beverly “Nese” Parrish. Mildred leaves behind her many treasured grandchildren, Alicia Harvey, Dennis Jackson, Jr., Teresa and Christopher Cahill; Myle Walker, Delmar Walker, Alexis Walker, honorary grandson Sean Morelle; Ernesto Montanez, Shayla and Nikolas Lewis, Riccardo Montanez; Tiyea Frazier, Shatiea Frazier-Love, and Anthony Jackson. Mildred held close the memory of her grandchildren who preceded her, Carmen Jackson, and Nathaniel Harvey, Sr. Mildred will live on in the hearts of her 26 great-grandchildren, as well as her brother-in-law, Franklin Parish; special nephews, Rodney, and Barry Johnson, and Willie Hardy; special friend, Channie Grimes; and her special friend and cousin, Rosa "Pinky" Epps. Mildred was predeceased by her brother, Eugene Gibbs; and her three sisters, Elizabeth “Queenie” Johnson, Victoria Gibbs, and Trillar Kennedy. The family would like to extend their gratitude to the kind and loving staff at the MVHS Rehabilitation & Nursing Center, especially Barton North and Barton West, for their care and compassion. Visitation will be held on Saturday, January 15, 2022, from 3:00 pm to 5:00 pm at the Eannace Funeral Home, Inc., 932 South St., corner of Hammond Ave. At 5:00 pm Mildred’s Home Going Service and Celebration of Life will be offered at the funeral home. Regardless of vaccination status, face masks are required to remain in compliance with the state and county mask order. Due to the surge in COVID cases, the family will not be having a reception after the service.

The family of Mrs. Mildred Louise "Millie" (Gibbs) Parrish created this Life Tributes page to make it easy to share your memories.

Send flowers to the Parrish family.