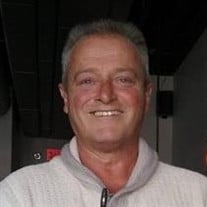 UTICA – Mr. Micheal J. Olsen, Sr., age 61, passed away unexpectedly on Thursday morning, January 6, 2022, in the comfort and dignity of his home. Born in New Hartford on June 8, 1960 Micheal was the son of the late George S. and Barbara M. (Barney) Olsen. Raised and educated locally, he was a graduate of Utica Free Academy. A loyal worker, Micheal spent the duration of his career as a Correctional Officer under the employment of the Mid-State Correctional Facility in Marcy, the position from which he retired. Micheal really loved his family, and particularly delighted in his grandchildren from the day they entered the world. A fun-loving man, Micheal was a joy to be around. He was known for being a comedian with a great sense of humor – sure to ignite a smile and a laugh. He was also a man with various passions, which played out in his hobbies. An intelligent man, Micheal loved studying history and was a reliable “History Buff” who was armed with extensive knowledge. He enjoyed spending time outdoors, particularly when he was able to go hunting or fishing. Micheal was furthermore a great cook who is most remembered for his famous venison backstrap sandwiches and his “Micheal burgers”; he loved to feed people whether they were hungry or not. Micheal is survived by his children, Stacy Mastrosimone, Michael Olsen and wife Melissa Olsen, Nicole Olsen, Audrey Olsen and significant other John Amrhein, Kayleigh Olsen and fiancé Justin LoCash, Brandon Olsen and significant other Denisa Dosic, Cory Olsen, and Christopher Olsen. He leaves behind his beloved grandchildren, Gianna and Johnathan Waters, Reyna Mastrosimone, Matteo Corti; Giuliana Olsen; Arianna Chudy; Ondrea Olsen; Brendon Kelly, Gayge Amrhein; Brayana Olsen, Gunnar Olsen; and Emilia Olsen. Micheal was also proud to be expecting another grandchild in July. He also leaves behind his great-grandchildren, Adryan Waters, and Luca Waters; his sisters, Lola and husband Richard Houle, Deborah Olsen, Janice McLean, Pat Bailey, Barbara Kovacs, Sharon and husband James Jacobs, and Candic and Walter Sienczenko; and brothers, G. Stuart Olsen, and John and April Olsen. Micheal held close to his heart the memory of his brother, Peter L. Olsen, Sr., who preceded him on November 15, 2021. Micheal will live on in the hearts of cherished friends, Edward G. Kaminski, Jr., Esq. and his wife Janice, as well as his life-long friend, Nelson “Butch” Smith. A Memorial Gathering will be held for Micheal’s family and friends on Tuesday, January 18, 2022 from 4:00 - 6:00 at the Eannace Funeral Home, Inc., 932 South St., corner of Hammond Ave. A Blessing will be offered at the conclusion of the gathering. Regardless of vaccination status, face masks are required to remain in compliance with the state and county mask order.

UTICA &#8211; Mr. Micheal J. Olsen, Sr., age 61, passed away unexpectedly on Thursday morning, January 6, 2022, in the comfort and dignity of his home. Born in New Hartford on June 8, 1960 Micheal was the son of the late George S. and Barbara... View Obituary & Service Information

The family of Mr. Micheal J. Olsen, Sr. created this Life Tributes page to make it easy to share your memories.