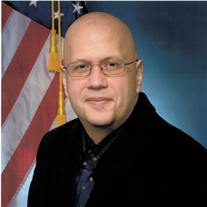 NEW HARTFORD - Michael C. “Mike” Wicks, PhD, age 61, passed away on Wednesday, December 9, 2020 at the Siegenthaler Center. He grew in grace through his adversity and is now home with Christ Jesus. Born in Utica on November 17, 1959, Michael was the son of the late William C. and Vincentia “Chancy” (DeBrango) Wicks. He earned an Associate degree in Science (Engineering Science) at MVCC; Bachelor degree of Science at Rensselaer Polytechnic Institute (RPI); Master degree in Science/Philosophical Doctorate at Syracuse University (all in electrical engineering); and a Master of Arts in Public Administration at Syracuse University. Michael’s prolific career included a variety of prestigious positions beginning at the Air Force Research Laboratory initially working in radar in Rome, but later in Dayton, Ohio. He developed Sensor Signal Processing Technology for intelligence, surveillance, and reconnaissance systems. He was a Systems Engineer supporting a variety of national security needs inclusive of the Air Force, Army, Navy, and international partners through NATO and beyond. He was an Executive the last 10 years of his Air Force career and was able to solve problems at a very high level which he enjoyed. He then taught graduate students at the Catholic College of the University of Dayton. Beyond his rigorous professional and pedagogical responsibilities and research, he would rest each day with a couple of hours of sleep. Refreshed and revived, he would then spend time on various creative projects including woodworking and hand crafted religious icons. He followed the logic of basic building principles and revised them to include his own variations and creative ideas. He also held a seat on the Board of the Central Association for the Blind and Visually Impaired (CABVI) as well as on the Mohawk Valley Water Board. A man of deep faith in his Catholic creed, Mike was a parishioner of St. Mary of Mt. Carmel/Blessed Sacrament Parish where he was an Altar server, Reader, Building Committee member, Eucharistic Minister, and volunteer at the annual church bazaars. He firmly believed that Jesus was true God and true man, and Mike knew that Jesus would never leave him nor forsake him. Mike was blessed with wonderful parents. He followed his dad’s exemplary work ethic and his mom’s compassionate heart, all of which brought to his life a balance of peace and perseverance. He is survived by his sister and brother-in-law, Mary and John Russo; his niece, Sara Michaela Russo; his nephew, John Michael Russo; his beloved cousins, Robert Ollerenshaw, Gary Ollerenshaw and Brian Thompson, John and Gloria Ollerenshaw, Louis and Lisa Ollerenshaw, Francis and Cynthia Ollerenshaw, and he was preceded by his cousin David Ollerenshaw (2007); Ann Marie Mizgala; as well as many second cousins; special friends who were with Mike throughout his illness; Paul Antonik, Rocco Garro, Joe Robertaccio, Nihad Alfaysale, Hamdi Abdelbagi, Lorenzo LoMonte, Pat Zasa, Terri Panuccio, and best friend Fred Sadallah and his wife Andrea. He was predeceased by his maternal grandparents, Pasquale and Marietta DeBrango; his aunts and uncles, Pasqualina “Lena” and Robert Ollerenshaw, Angeline and Peter Mizgala, and John DeBrango. Special thanks to Dr. Desai and his medical team for their care and expertise; Dr. Rice – Radiation-Oncology; MVHS @ St. Luke’s Acute Rehabilitation staff; and the staff of the Hospice & Palliative Care, Inc. Siegenthaler Center for their care in Mike’s final days. Relatives and friends are respectfully invited to attend Michael’s funeral service and Celebration of Life which will commence on Tuesday, December 22nd at 11:30 at St. Mary of Mt. Carmel/Blessed Sacrament Parish where his Mass of Christian Burial will be offered. Face masks covering your nose and mouth are required, and social distancing and contact tracing will be implemented. In lieu of flowers, memorial contributions in Michael’s name may be directed to St. Mary of Mt. Carmel/Blessed Sacrament Parish online at https://www.mountcarmelblessedsacrament.com or by mail to 648 Jay St., Utica, NY 13501 or to Hospice & Palliative Care, Inc. online at https://hospicecareinc.org/donate-online; envelopes will also be available at the service. His family and friends will escort him to his place of rest at St. Agnes Cemetery. During this time of social distancing that we are all experiencing, please take a moment to connect with Michael’s family through the “Memories” section of his obituary. Our prayers go out to all as a sign of our continued support.

NEW HARTFORD - Michael C. &#8220;Mike&#8221; Wicks, PhD, age 61, passed away on Wednesday, December 9, 2020 at the Siegenthaler Center. He grew in grace through his adversity and is now home with Christ Jesus. Born in Utica on November 17,... View Obituary & Service Information

The family of Michael C. "Mike" Wicks, PhD created this Life Tributes page to make it easy to share your memories.

Send flowers to the Wicks family.