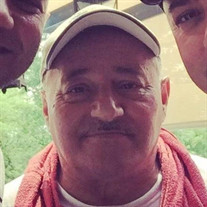 UTICA/LIVERPOOL, NY - Mr. Michael Szczesniak, age 73, passed peacefully on Monday, October 12, 2020 with those he loved most in his heart. Born in Utica on May 16, 1947, Michael was the son of the late Bertha (Rygielski) Szczesniak. He attended St. Stanislaus Grammar School and was a graduate of T.R. Proctor High School/Class of 1966. A proud veteran, he enlisted in the United States Navy where he honorably served his country on two ships, The USS Puget Sound AD-38, and the USS Grand Canyon AD-28. On May 16, 1970 he married his childhood sweetheart Geraldine “Geri” Scire with whom he shared 50 years of love and family life. They shared enough for one another and for their boys to have made life fulfilling. Mike worked at the Bendix Corporation as an Assembler. In 1998 he became disabled and spent years recuperating and tending to his physical needs. A strong and determined man, Mike was also kind hearted, very humble, and blessed with a sense of humor. He lived each day to its fullest, never worrying about tomorrow. He was raised as a Catholic and believed in the Lord and the goodness of His ways. He was brought up by a wonderful woman who was also a hard working single mom. She was protective and taught him good values and the meaning of love. When he married, the union of the two families made for great in-laws. A skilled woodworker, Mike was competent in making repairs, constructing bird houses, and building garages and decks. He also took an interest in supporting his sons in the sport of baseball. The boys were natural pitchers, and they learned the form and technique from their dad. Both his woodcrafting hobby and mentoring his sons in sports brought him happiness. Mike was a spectator sportsman of the NY Yankees and the NY Giants, and he defended his teams to the end! He watched the actual game and followed by critiquing the plays and players during the encore presentation. A patient fisherman... he found the proper spot, prepared his lure and cast it into Lake Moraine. When he decided to follow the bigger fish, you could find him on his fishing boat on Oneida Lake. It was there that several of Geri’s uncles and relatives furthered his fishing experiences. So, it would not be unheard of to think that Mike would find sanctuary at Bass Pro Shops, always amazed at their inventory and products. He looked forward to family visits and sharing conversation and camaraderie with his relatives, and he recently mused that they made him so happy. Mike knew the love and companionship of his brother-in-law Dennis, who was like a brother to him, and he loved when Den and Ann would visit. Mike is survived by his devoted wife, Geri; his sons and daughters-in-law, Michael and Lynn Szczesniak, and Scott and Amy Szczesniak; and his grandchildren, Kaitlyn Szczesniak and Sam Wimbush and their son Giovanni Wimbush, Madison Szczesniak, Michael Szczesniak, Lynzee Szczesniak, Nikki Van Dreason Merchant and husband Mark, and Elizabeth Van Dreason. He also leaves his loving in-laws, Dennis and Ann Scire; nieces, nephews, great-nieces, and great-nephews, Carrie and Jeff Robinson and children Ashley, Jeffery, Carley, and Courtney; and Denise Scire and her daughter Emily; his cousins, especially Mike and Laura Doti; his friend Al Wielgos, and his other fishing buddies. He also leaves behind his domestic felines, who were a great companionship to him, Rustie and Tinker. He was predeceased by his father-in-law and mother-in-law, Joseph and Catherine “Katie” (Medici) Scire. The family extends their appreciation to the staff of the Syracuse VA Medical Center, including the doctors, nurses, and aides for their kindness, especially the 7th Floor; the Visiting Nurses who were of great support; and the 911 personnel and EMTs who often assisted in lifting Mike to comfort. Visitation will be held Friday from 4:00 - 6:00 at the Eannace Funeral Home, Inc. 932 South St., corner of Hammond Ave. Due to current restrictions, we will be operating at a reduced occupancy. We ask for your patience as we try to accommodate those coming to support the Szczesniak family. Face masks must be worn and contact tracing will be implemented. A Final Blessing and Celebration of his Life will be celebrated on Saturday morning at 10:00 at Calvary Cemetery Mausoleum Chapel with Military Honors conferred by the US Navy. Our prayers go out to all as a sign of our continued support.

UTICA/LIVERPOOL, NY - Mr. Michael Szczesniak, age 73, passed peacefully on Monday, October 12, 2020 with those he loved most in his heart. Born in Utica on May 16, 1947, Michael was the son of the late Bertha (Rygielski) Szczesniak. He attended... View Obituary & Service Information

The family of Mr. Michael Szczesniak created this Life Tributes page to make it easy to share your memories.

Send flowers to the Szczesniak family.