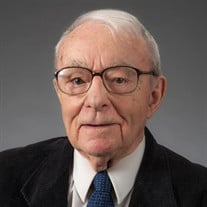 UTICA - Mr. Michael P. DeSantis, age 93, passed in peace with his loving family by his side on Tuesday, May 19, 2020. Born in Utica on September 17, 1926, Michael was the son of the late Vito “Vic” and Beatrice (Durante) DeSantis. A proud veteran of the United States Army, Mike honorably served his country stateside. In 1950 he married the former Jacqueline “Jackie” Carstens with whom he shared 70 years of love, respect, and family life. A graduate of Syracuse University and Law School, Mike practiced law from 1950 until the time of his death, starting as a solo practitioner and establishing the partnership of DeSantis & DeSantis in 1977. He was admitted to practice by the Appellate Division of the Supreme Court of the State of New York on 7/13/50; by the United States District Court on 2/24/54; and by the United States Court of Appeals on 9/9/74. He received an award from the US District Court for distinguished service as an officer of the court for 50 years. He was a member of the New York State and Oneida County Bar Associations. Mike was a skilled skeet shooter, participating in many competitions and winning numerous medals including Ottawa Trap & Skeet Club 2005/12 gauge, Canadian Open 1996/12 gauge, New York State Championship 1992/12 gauge, Canadian Open 1997/28 gauge, and New York State Championship 1989/28 gauge. Michael is survived by his wife, Jacquelyn DeSantis; his children and their spouses, Michael V. and Elizabeth DeSantis, Bradford “Brad” and Lorna DeSantis, and Jill and John Carpenter; his grandchildren, one of the greatest joys in his life, Christopher Michael DeSantis, Mary Elizabeth DeSantis; Evelyn DeSantis; and David Carpenter; and his sister, Lucretia (DeSantis) Hunt. He was preceded by his sister and brothers-in-law, Carmela and Santo Catera, and Fred Hunt. He also leaves his nieces and nephews, Cynthia Hunt Newton; Dawn Catera Lupi and husband Russell, and Damian Catera; and his great-nieces, great-nephews, and friends. Due to current health concerns and in keeping with federal and state regulations, the family will honor Michael’s life privately. Expressions of sympathy in the form of donations may be directed to St. Jude Children’s Research Hospital online at https://www.stjude.org or by mail to St. Jude Children’s Research Hospital, 501 St. Jude Place, Memphis, TN 38105. Please take a moment to connect with Mike’s family through the “Memories” section of his obituary on our website. Our prayers continue to go out to all as a sign of our community support.

The family of Mr. Michael P. DeSantis created this Life Tributes page to make it easy to share your memories.

Send flowers to the DeSantis family.