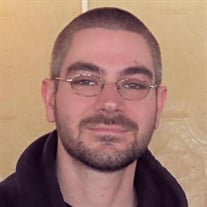 UTICA, NY – Michael A. “Mikey” Castelli, age 32, passed away after many courageous efforts in his battle against cancer on Monday evening, November 8, 2021; his mom, dad, and “canine bud ‘Ollie’” accompanied him with loving hearts to his last moment on this Earth. Michael was born in Utica on April 7, 1989 to his beloved parents Patrick A. and Brenda (Rzotkiewicz) Castelli. He attended Albany Elementary School, JFK Middle School, and went on to graduate from T.R. Proctor High School/Class of 2007. He continued his academic pursuits at MVCC. Michael was a valued employee who worked the Front End at Price Chopper in South Utica. There, he fulfilled his tasks and many responsibilities commendably. Michael also honored his work at Graziano’s Lawn Care, where he appreciated and respected his employer, Phil. In fact, Michael saw this experience as a privilege, as he admired his boss and his commitment to “getting the job done right!” A man of quiet demeanor, Michael was known to show his love for family in the simple ways. He adored his mother, and the duo shared countless cherished times together. One of their favorite traditions revolved around Michael’s favorite time of year – the holidays – when Michael and Brenda enjoyed decorating the Christmas tree. Each had their own favorite ornaments, and they blended these trinkets with great strategy, showing each of their talents; it often remained part of the décor of the house until at least March! More importantly, Michael had a secure relationship with his mother, and saw her as someone he could confide in and trust. Brenda was a consistent presence who could help guide Michael, and together, they always realized his objective. Michael partnered with his dad in caring for their lawn and completing the trimming; unfortunately, the work was never quite done to Patrick’s way! Thus, at times Michael would just concede and go in and take a shower. Michael was fortunate to have great parents, and great familial relationships. He was also especially close to his sister Kim, with whom he shared a special bond. The two often defended and protected each other. When the time came for the birth of Kim and Victor’s daughter, Michael transformed into a proud uncle. The minute she entered the world, Michael doted on her. He enjoyed spoiling his niece, and then sending her back home to her parents! Michael was an avid walker and physically fit. Whether it was with his daily routine of walking in Proctor Park, or at the track at MVCC, he was known to use his feet as his main mode of transportation. Michael was also a loyal Patriots fan, defending them to the end. Additionally, Michael was a part-time golfer, which enabled him to take in the picturesque scenery. He was a natural when it came to operating the latest technologies and computers. He was also a serious gamer, especially favoring Pokémon. Finally, when it came to food choices, Michael was pretty much a fussy eater and tended to select the simpler choices of meals. Michael’s diagnosis with a rare form of cancer highlighted his immense interior strength. Though not every day was easy and there were certainly difficult times, he committed to running this race imposed on him by his sickness. Michael’s courage was admirable to all who knew him. Michael is survived by his parents, Patrick and Brenda; as well as his sister and brother-in-law, Kimberly M. and Victor Costanza, Jr.; and his adored niece, Nora Irene Costanza. Michael will be fondly remembered by his maternal grandmother, Stella (Garncarz) Rzotkiewicz; and his aunts and uncles, Sharon and Gary Carrock, Sr., Carol Ann Abiusi and the late James P. Abiusi, and Guy Rzotkiewicz and Debbie Schepsis. He will live on in the hearts of his cousins, Gary Jr. and Christine Carrock, and their son, Gary Carrock III; and Jenna and Jon Saporito. Michael’s memory will also be cherished by his great-aunt, Lydia Edwards and the late Dick Edwards; and great uncles, Richard Nora, and Bob Nora and his fiancé Ann Anken. He will always be loved and remembered by his canine bud, Ollie (or as Mike preferred to call him, Orbie). Michael was predeceased by his paternal grandparents, Pasquale A. “Pat” and Jeanne (Nora) Castelli; his maternal grandfather, Walter Rzotkiewicz; and his original canine bud, Jingles. The Castelli family would like to extend their gratitude to Dr. Najam ud Din, Michael’s oncologist, as well as the 6th floor staff of MVHS at St. Luke’s, who were all fabulous. Additionally, the family wishes to especially thank Christina, Sarah, Mandy, and Tatyana for their kindness, compassion and connection; each was so special to Michael, and his family will be forever grateful. Visitation will be held Tuesday evening, November 16, 2021, from 4:00 to 6:00 at the Eannace Funeral Home Inc., 932 South St., corner of Hammond Ave. Relatives and friends are respectfully invited to attend Michael’s Mass of Christian Burial and Celebration of Life which will commence on Wednesday morning, November 17, 2021, at 10:00 at St. Mary of Mt. Carmel/Blessed Sacrament Parish, 648 Jay St., Utica. Interment will follow in Calvary Cemetery.

The family of Michael A. "Mikey" Castelli created this Life Tributes page to make it easy to share your memories.

Send flowers to the Castelli family.