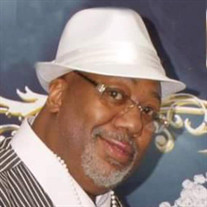 UTICA - Michael Charles “Chuck” Carter, age 56, passed away unexpectedly on Wednesday evening, October 6, 2021, with those he loved most in his heart. Always a native of Utica, Chuck was born on December 13, 1964 to the late Michael Charles Carter, Sr. and Bernice Joyce Williams. As a boy, Chuck attended Kernan Elementary School and then went on to graduate from Utica Free Academy, where he excelled in the game of basketball. Those who loved him sometimes said, “he played too much.” He was known for messing around with others, and whipping out his special lines to amuse them, and tease out a smile. Often, Chuck was equipped with a joke and a smirk, and was notorious for his excitement over his favorite NFL and NBA teams: the Baltimore Ravens and the NY Knicks. Chuck, who was credited as a dedicated and hard worker, was employed for many years at WalMart Distribution Center, at the Truck Gate as well as Security. After his time there, Chuck moved on to work for Trenton Technology Inc. Chuck loved his family, and appreciated passing time with his children, siblings and loved ones. When the family would gather, Chuck was known to take on a variety of roles – from grill master to the DJ! These get-togethers were held in the lot across the street from his mom’s house, which she purchased specifically for all these events. These parties were always a fun time, and many memories were made that will always be cherished. Moreover, Chuck had a particularly special place in his heart for his mom, and was heartbroken when she passed. There is much peace in that Bernice and her son are to be reunited again. Chuck also found comfort and hope of salvation in his time spent worshiping at Peter Spencer Church, UAME. While there, he appreciated the leadership of Pastor Clark. Chuck is survived by his children and their loves, Michael Carter Jr. and his fiancé, Sandra Lacy; Rossi Harris and Mahogany White; and Chantal Carter. Chuck was blessed with cherished grandchildren, Reyna Lynn Harris, and Savannah; and was preceded by his grandson, Apollo. He also leaves his siblings and their loves, Brian R. Carter; Malina L. Carter; Lucille Carter; Lauri A. Carter; and Jesse Pittman III and Jasmine Rosa; his aunts, Della M. Williams; Forestine Williams; and Maisa Laureen Young Williams; his uncle, Paul D. Williams; nieces, nephews, great-nieces, great-nephews, and cousins. Chuck shared brother-like friendships with Kenneth Lacy, Reggie Walker, and Bryant Clark aka “OB”. He was predeceased by his maternal grandparents, Silas and Queen Esther (Young) Williams; and his uncles, Silas Williams Jr. and Joseph N. Williams. The Carter family thanks Chuck’s community of friends for being a part of his life. Visitation will be held Saturday afternoon, October 16, 2021, from 2:00 - 3:00 pm at the Eannace Funeral Home, Inc., 932 South St., Corner of Hammond Ave. Relatives and friends are respectfully invited to attend Michael Charles “Chuck” Carter’s Home-going Service and Celebration of Life, which will commence at 3:00 pm at Eannace Funeral Home, Inc. Interment will take place at New Forest Cemetery at the convenience of the family.

The family of Michael Charles "Chuck" Carter created this Life Tributes page to make it easy to share your memories.

Send flowers to the Carter family.