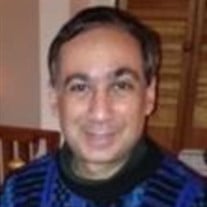 UTICA - Mr. Michael A. Carchedi, age 59, passed away unexpectedly on Monday, March 16, 2020. At the time of his passing, he was in the hearts of those he loved the most. Born in Rochester, NY on January 15, 1961, Michael was the son of the late Anthony L. and Josephine S. (Zampardi) Carchedi. Raised and educated locally, he was a graduate of Utica Free Academy. He continued his studies at MVCC where his courses were concentrated in drafting. During the 37 years Michael worked at the Human Technologies Corporation, he was a key player in providing uniforms for many agencies across the United States. In 2019 he received the Donald A. St. Louis Mission Award for his steady work ethic, dedicated job performance, and ability to exemplify the power of people with a disability to perform with purpose. He also was the recipient of the Joslin Outstanding Performer Award through New York State Industries for the Disabled Inc. celebrating his excellent job performance and personal growth, as well as an award through the Disability Employment Initiative that provides services for all New York State Career Centers. Michael also was selected to attend the Capital Conference on Work and Technology which took place in Washington, DC. Michael was a strong advocate for people with disabilities. Although he had a quiet, calm demeanor, he loved people unconditionally. His parents were his primary teachers, and they taught him to be an independent soul. Over time, he became more social and enjoyed many local events and gatherings held in Utica, including Utica Monday Night, Munson-Williams-Proctor Arts Institute, the Broadway Theater League, and Good Ole Summertime. He loved music and enjoyed dancing, was amazing at trivia and statistics, never forgot a birthday, and always followed up with a thank-you card for a kind deed he received. He had a great passion for collecting stamps, and enjoyed Utica Comets games and trips to the Oneida Lake area. He was a parishioner of Historic Old St. John’s Church. Michael is survived by his siblings and their spouses, Barbara and Donald Laible, Denise and Bryan Ransiear, and J. Mark and Charisse Carchedi; cherished nieces and nephews, Mark and Katherine Laible; Steven Anthony and Natalie Ransiear; Hayley and Vincent Carchedi (Michael’s godchild with whom he shared an inseparable bond); great-niece Grace; many cousins; his uncle Frank Zampardi; great-aunt Lavina Perri; and co-workers who blessed his life and whom he considered as good friends. He was predeceased by his godparents, Pat and Jean Sacco. The family will honor and commemorate Michael’s life at a private time. In lieu of flowers, donations in Michael’s memory may be made to Historic Old St. John’s Food Pantry, 240 Bleecker St., Utica, NY 13501. Interment will take place in Calvary Cemetery at the convenience of the family.

UTICA - Mr. Michael A. Carchedi, age 59, passed away unexpectedly on Monday, March 16, 2020. At the time of his passing, he was in the hearts of those he loved the most. Born in Rochester, NY on January 15, 1961, Michael was the son of the... View Obituary & Service Information

The family of Mr. Michael A. Carchedi created this Life Tributes page to make it easy to share your memories.

Send flowers to the Carchedi family.