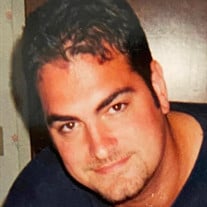 UTICA - Mr. Michael V. Brancaccio, age 46, passed peacefully in his sleep on Sunday, October 11, 2020. His unexpected passing occurred in the comfort and dignity of his home with the love of his family in his heart. Born in Utica on December 13, 1973, Michael was the son of Vincent “Vinny” Sr. and Pia (DeCarlo) Brancaccio. He was a graduate of Notre Dame High School/Class of 1992 and a star on the ND football team, playing the position of Halfback. He also excelled at the sport when he played in Frankfort Pop Warner Football. He went on to play semi-pro football with a Florida team. He was a big fan of the Tampa Bay Buccaneers, and he held a season ticket when he resided in Florida. An industrious young man, his first job was at the Utica Zoo, followed by various prep-cook positions in many notable Utica restaurants. In his 20’s he relocated to Florida to be with his grandma Betty and keep her company. While there, he fell in love with Joanne Rabeda and together, they were blessed with a son, Matthew. They were wonderful parents and have remained good friends ever since. Michael was a good-hearted, compassionate man. He opened the door to his heart and home to so many people. He was a great son and brother who shared his love with his mom, dad, and siblings. When he moved back to Utica, he worked as a car salesman for the Carbone Auto Group, and through his integrity and drive, he built up an outstanding following of customers and earned the respect of management to the degree that he was the recipient of the “Salesman of the Year” Award, among other recognitions of excellence from General Motors. Michael had a wonderful home life, complete with big holiday get-togethers, birthday parties, and Easter celebrations with a household filled with love. They were all good memories! Michael was a sports enthusiast and an avid basketball player at St. Agnes and Notre Dame. He was competitive, but fair. To add to the fun, Monsignor Willenburg would open the gym on Sunday nights so the boys could play basketball. He enjoyed spending time at his brother Anthony’s camp at Chase Lake in Glenfield in the tranquility of the Adirondacks. It was the perfect place for fishing, swimming, bonfires, and four wheeling with his children in the summer. Though he hailed from humble beginnings, his humanity, sensitivity, and generosity were grand hallmarks of his character. He had a genuine desire to help others, be a shoulder to cry on, and get people to a better place. His parents were so proud of him. He prayed to the Lord for guidance, trusted His wisdom, believed in His divine words, and opened his heart to Jesus, …and he was saved. His children were his greatest gift and his pride and joy. He showed patience and was very forgiving. He encouraged his kids to be the best they could be, learn from experience, and journey well in this life. He hoped they would remember his teaching, his bits of wisdom, and most of all, …his love. Michael is survived by his father and mother, Vincent and Pia; his children, Matthew Vincent Brancaccio, Giovanni Brancaccio, Lorena Brancaccio, and Bella Brancaccio; and his siblings, Anthony Joseph & Tara Brancaccio, Maria Brancaccio, Vincent “Vinny” Brancaccio Jr., and Heather Brancaccio. He also leaves his aunts, uncles, nieces, nephews, great-nieces, great-nephews, cousins, and many great friends throughout his life. The family is sincerely thankful to all who showed their support through donations, food, and many kind acts and gracious deeds during this difficult time. Visitation will be held Sunday afternoon from 3:00 - 5:00 at the Eannace Funeral Home, Inc. 932 South St., corner of Hammond Ave. Due to current restrictions, we will be operating at a reduced occupancy. We ask for your patience as we try to accommodate those coming to support the Brancaccio family. Face masks must be worn and contact tracing will be implemented. Michael's funeral service and Celebration of Life will commence at the funeral home upon conclusion of visitation. Interment will take place in Calvary Cemetery at the convenience of the family. Please take a moment to connect with Mike's family through the “Memories” section of his obituary. Our prayers go out to all as a sign of our continued support.

UTICA - Mr. Michael V. Brancaccio, age 46, passed peacefully in his sleep on Sunday, October 11, 2020. His unexpected passing occurred in the comfort and dignity of his home with the love of his family in his heart. Born in Utica on December... View Obituary & Service Information

The family of Mr. Michael V. Brancaccio created this Life Tributes page to make it easy to share your memories.

Send flowers to the Brancaccio family.