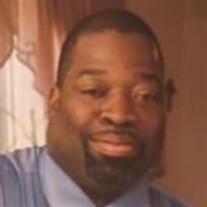 UTICA/NEWPORT NEWS, VA - Mr. Melvin Jerome Pete, age 56, went home to the Lord on Saturday, October 23, 2021; although unexpectedly, he passed away in the comfort and dignity of his home. Born in Utica on May 10, 1965, Melvin was the beloved son of Hattie J. (Pete) Richardson and the late Daniel J. Patterson. Melvin remained local for his formative years of education, having attended Christopher Columbus Elementary School, and graduating from T.R. Proctor High School/Class of 1985. Melvin enlisted with the U.S. Army and served for 15 years before he was honorably discharged and returned to VA, which at this time, had become Melvin’s home. He went on to pursue higher education in Business Administration and Accounting, and even studied to be a paralegal as he had a great affinity for the law. Each academic and career achievement was accomplished due to Melvin’s commitment to providing for his “Ma” and family. He was an ambitious man with great desires, and a loyal and loving heart for his cherished family. Always an entrepreneur, Melvin’s life story was that of a motivated man dedicated to self-improvement through career exploration and advancement. During his younger years, when he was not participating in karate, Melvin impressed family and friends with his salesmanship skills, starting when he sold candy bars. Even from his youth, Melvin was organized and showed great creativity with his imaginative business endeavors, which gained him the respect of his neighborhood and circle of friends. Furthermore, he was a community activist; he carried these skills he learned from his activism into his interactions with government leaders, and they were integral to his success. Consequently, Melvin was a figurehead for many to follow in the City of Utica. While in VA, Melvin spent a tenure at Crowns/Shell Services as a supervisor and manager. A natural leader, Melvin grew to be a trusted person within this family owned business. Melvin continued to further his knowledge with the subsidiary company, Kangaroos Services Company. His skills and abilities were exceedingly well suited for these positions in the corporate world. Following these successes, Melvin engaged his love of technology by accepting a position at Takaha Computer Company. There, he utilized his ingenuity and offered a great mindset to this environment. Despite the pandemic and all of its accompanying distress, Melvin was able to encounter success. As is consistent with his numerous entrepreneurial efforts, Melvin began a car rental business, and offered Uber Services. Additionally, he was a landlord to multiple dwellings. Melvin was always putting his heart and soul into his business undertakings, and embraced each task with a passion that was characteristic of him. Melvin was a man who knew himself; he knew his limits as well as his strengths and honored them both. This self-knowledge anchored him into a good place, enabling Melvin to work each day to the best of his ability. Melvin lived by the mentality that positive thinkers are winners; he applied this appealing mantra in his approach as he made wise investments and managed his finances prudently. Everyone was so proud of him, and would enjoy watching as he worked, plotted and planned his way to success after success, staying focused and pursuing his path to happiness. Yet through it all, Melvin remained selfless. He was an incredible man who constantly looked after his family, and was especially devoted to his Mother. His mother’s baby boy from the day of his birth – Mother’s Day – Melvin’s heart belonged to his mother, and not a day went by when Melvin was not concerned for her well-being. She will miss him forever. In his spare time, Melvin was reading both financial journals and finance books in order to stay abreast of the monetary climate. On the lighter side, he loved watching soap operas and particularly enjoyed the classic series “Dallas;” Melvin particularly admired the character J.R. Ewing. He enjoyed a good chicken dinner, and found bread pudding just as special. Melvin knew the Lord, whose words served to guide him throughout his life. Melvin would often turn to the Bible and read passages when he needed spiritual guidance. Melvin is survived by his beloved mother, Hattie; as well as his siblings and their loves, Tony Woods (Alice), Patricia Pete, Clynell (Norris) Gary, Linda Joyce Pete, Fredrick Pete, Tina (Timothy) Coleman, Elmer (Denise) Prince, Tisha Prince, Patricia Patterson, Daniel Patterson, Jr.; Oscar Patterson, Elizabeth Patterson-Moyer, Booker Patterson, and Cynthia (Harold) Bivens. Melvin was preceded by, his maternal grandmother, Clynell Cooper; step-dad, Silis Richardson, and siblings, USMC (Ret.) MSgt. Floyd Patterson, Willie Lou Patterson, Samuel Patterson, Cleave Prince, and Lois Wilcox. Melvin will be fondly remembered by a host of nieces, nephews, great-nieces, great-nephews, and cousins; as well as his childhood friends, Scotty Johnson, James Carter, Mark Williams, Chuck Spain, and John Jackson. Melvin also shared life with a special Virginia Family, the Robinson’s. Relatives and friends are respectfully invited to attend his visitation which will commence on Friday morning, November 5, 2021 from 10:00 to 11:30 at the Eannace Funeral Home, Inc., 932 South St., corner of Hammond Ave. Melvin’s Home Going Service and Celebration of Life will follow at 11:30. Interment will take place in Forest Hill Cemetery.

UTICA/NEWPORT NEWS, VA - Mr. Melvin Jerome Pete, age 56, went home to the Lord on Saturday, October 23, 2021; although unexpectedly, he passed away in the comfort and dignity of his home. Born in Utica on May 10, 1965, Melvin was the beloved... View Obituary & Service Information

The family of Mr. Melvin Jerome Pete created this Life Tributes page to make it easy to share your memories.

Send flowers to the Pete family.