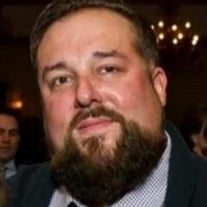 UTICA - Matthew R. &#8220;Matt&#8221; Wilkinson was 36 years of age. Due to the devastating effects of clinical depression, anxiety and bipolar disorder, Matt put an end to his pain, sadness, and hopelessness when he ended his life on Saturday,... View Obituary & Service Information

The family of Mr. Matthew R. "Matt" Wilkinson created this Life Tributes page to make it easy to share your memories.

Send flowers to the Wilkinson family.