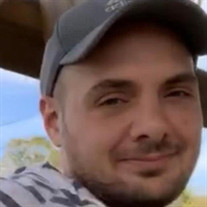 UTICA – Mr. Matthew C. Goss, age 31, passed away unexpectedly on Monday, August 17, 2020. At the time of his passing, he was welcomed by the embrace of his big brother, Jason, who preceded him nearly 6 years ago. Born on November 18, 1988, Matthew was the son of David E. Jr. and Donna M. (Ellsworth) Goss. He was a graduate of Notre Dame Jr./Sr. High School/Class of 2006 where he took pride in being a member of the NJROTC program. He went on to study Automotive Technology at SUNY Morrisville. Matthew shared in a loving relationship with Kayla Guarascio, and was a great support to her. His lighthearted side (when he would eat all her left-overs) and his keen mind intrigued Kayla, and she has many good memories to help her carry on. Kayla and Matthew were expecting a son on October 7, 2020. Matthew was a stand-up guy, a great role model for her children, and would have been an amazing father to their son, and forever, he will watch over his baby boy from above. Matthew worked at the New York State Office of Mental Health as a Maintenance Technician working at multiple facilities on team ‘Revit’, a group of dedicated employees who covered a vast area whenever and wherever their services were needed. Matthew had started to study the goals, job responsibilities, and guidelines of the trade when his family of co-workers took him into their ranks. They truly cared about one another and he felt blessed to join them and held them in high esteem. A jack-of-all-trades, Matthew educated himself in many areas. He learned quickly and always took on a challenge with confidence. His ambitions were internalized and focused, allowing him to master many things. Working meticulously outdoors made him happy. He plowed snow, mowed lawns, and had a vision for his future focused through the lens of his self-acquired expertise and common sense. He loved motorcycles and cars and was a trained, conscientious, responsible cyclist. When he engaged in this avocation, it ‘cleared his head’. He enjoyed classic cars and attended the annual Syracuse National with his dad and brother. When Jason passed, he and his dad continued the tradition, and more recently, his mom Donna and Kayla joined them. He was known to root for the New York Yankees and the Dallas Cowboys. A family oriented young man, Matthew loved his grandparents and extended family. The loss of his brother Jason changed his life and he kept his memory in his heart. Matthew was a kind-hearted soul, and he knew love during his journey in this world. His parents loved him, and in retrospect, he appreciated their advice. The Lord lived in his heart. Matthew was so thrilled about becoming a dad, …he wanted to pass to his son all the knowledge he accrued during his life. With Kayla by his side, he would have evolved into an exemplary parent, a beautiful combination of his mom and dad. Matthew is survived by his compassionate parents, Dave and Donna; and the loving relationship he shared with Kayla Guarascio and her children. He held close to his heart the memory of his brother Jason who passed on August 29, 2014. He also leaves his paternal grandmother, Sandra Moretti; aunts and uncles, Charles Ellsworth and Kathy Ellsworth, Roger “Skip” and Linda Ellsworth, Diana Ellsworth, and Robin Goss; great-aunts, great-uncles, numerous cousins, godmother Carol Bevacqua; and childhood friends who remained in each other’s lives, Steve Egert, Dan Haggerty, and Mark Zemanek. He was predeceased by his maternal grandparents, Charles E. Sr. and Antoinette Ellsworth; paternal grandfather, David E. Goss Sr.; and uncle, Edward Ellsworth. The family is grateful to the ‘Revit’ team, Matthew’s great group of friends who helped and responded to his untimely passing while he was at a job he loved. The family will honor and commemorate Matthew’s life at a private time. Relatives and friends are respectfully invited to attend Matthew’s funeral service and Celebration of Life which will commence on Monday morning at 11:00 at St. Anthony & St. Agnes Church where his Mass of Christian Burial will be offered. Face masks are required, and contact tracing will be implemented. In lieu of floral offerings, memorial contributions in Matthew’s honor may be made to the family enabling them to establish a Trust Fund for his son; envelopes will be available at church. Entombment alongside his brother, Jason, will follow in St. Matthew Courtyard of Christ Our Savior Mausoleum at Calvary Cemetery. Please take a moment to connect with Matthew’s family through the “Memories” section of his obituary. Our prayers go out to all as a sign of our continued support.

UTICA &#8211; Mr. Matthew C. Goss, age 31, passed away unexpectedly on Monday, August 17, 2020. At the time of his passing, he was welcomed by the embrace of his big brother, Jason, who preceded him nearly 6 years ago. Born on November 18,... View Obituary & Service Information

The family of Mr. Matthew C. Goss created this Life Tributes page to make it easy to share your memories.

Send flowers to the Goss family.