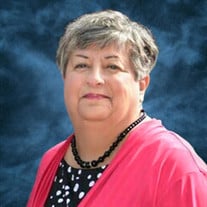 UTICA - Mrs. MaryBeth (DeSarro) LaNeve, age 66, was carried in God’s arms as she passed away on Friday, June 26, 2020 with those she loved most in her heart. Born in Utica on September 28, 1953, MaryBeth was the daughter of the late Peter F. and RoseMarie (Barrella) DeSarro. She graduated from Mt. Carmel Grammar School in 1967 and was a graduate of Utica Catholic Academy/Class of 1971. On July 13, 1974, she married her childhood sweetheart, Richard J. “Rick” LaNeve, Sr. They were best friends, put each other’s needs first, and took one day at a time …and that was the foundation for their nearly 46 year union. Throughout her working career, MaryBeth was graced with an earnest work ethic that helped her to fulfill all her responsibilities professionally and accurately. She held positions at TB Associates, Nackley Insurance Company, and Niagara Mohawk Power Corporation. Lastly, she served as Secretary/Business Administrator of St. Mary of Mt. Carmel/Blessed Sacrament Parish beginning in 1986, and was the first paid parish Secretary, following in the footsteps of her aunt, Theresa DeSarro, who was the volunteer bookkeeper. Throughout her illness, MaryBeth continued to work with gratitude in her heart for the honor of helping and interacting with people in need. She was a humble woman who gave her all, to a job she loved. Her life was truly a Mt. Carmel story. Her gentle heart and generous humanity inspired her to quickly cook up her “famous sausage and peppers dish”, especially when someone experienced a loss. She had the guidance of a “mother’s heart” as she raised her children to develop their individual, natural talents to become resourceful, respectful, and responsible adults. She was the glue that held everyone together, and a mother with a non-judgmental heart. She always gave the best advice during times of need. MaryBeth loved to cook and host meals. She always made sure there were “leftovers” and even had them packaged and ready to be handed out prior to the meal! In addition, she possessed outstanding baking skills. Her Christmas trays were famous for having over 15 different types of cookies. During her spare time she enjoyed reading romance novels and mysteries. She was enthralled by watching episodes of Perry Mason and Ironside, and she lost herself in the Hallmark channel and MeTV. She and Rick often watched HGTV and especially enjoyed the Property Brothers. She was a masterful “list-maker” who organized her tasks meticulously. MaryBeth had a simple smile and she “looked for the good in everyone,” but she also had “the look” when things were not up to par. Her favorite place on earth was the Adirondacks, especially Old Forge where she and Rick rented a summer home for a family get-away week. A communicant of St. Mary of Mt. Carmel/Blessed Sacrament parish, MaryBeth was faithful to her Catholic creed. She displayed fidelity to her family, her Lord, and the individual clergy and parishioners that she served. It was her honor to have attended to Rev. James Cesta, Rev. John Rose, Rev. Ron Bill, Rev. Joe Salerno, Rev. Tom Servatius, as well as Scalabrini Fathers, especially the late Rev. Henry Benin. She shared a unique sister/brother relationship with Rev. Luis Olguin. MaryBeth is survived by her husband, Rick; her son and daughter-in-law, Richard “Rick” Jr. and Kit LaNeve; daughter and son-in-law, Margaret “Margie” and Mike Hammell; sister, Pat Debbold; brother and sister-in-law, John F. and Katherine “Kathy” DeSarro; in-laws, Angela and Thomas Chmielenski, Jeanine and Gary Surprenant, and Glenn and Lynn Devendorf; two very important people who were an integral part of her life and who she loved as siblings, Marie Robilotto, who was also her cousin, and Tom Gerace. She also leaves her nieces and nephews, Jason Debbold, Colleen and Chris Thurston, Eric and Amy Debbold, Corey Debbold, Craig Debbold, Scott and Melissa Debbold, Stephanie and Marc Planty, and their father, Dave Debbold; Marie and Bug Loughren, Peter and Vanessa DeSarro; Thomas Chmielenski; Thomas "Tad" Devendorf, David and Kim Devendorf, Laurie and Randy Delven; Christopher and Nicole LaNeve; Christopher Surprenant and Joseph Saccento, and Nicholas Surprenant and Lyndsey Chenier; great-nieces, great-nephews, cousins, and goddaughter, Francesca Gerace. She came to know the love of the family canine Tiki, that she spoiled and was her constant companion. MaryBeth had an entourage of supporters, inclusive of family and friends who she referred to as “Mary’s Army”, Pat Debbold, Marie Robilotto, Roseanne Gerace, Francesca Gerace, Jeanine Surprenant, Maria Kozak, RoseMary Chiffy, Terri Panuccio, Gordon Schindler, Chuck Janicke, Antoinette Azzarito, Chris Surprenant, Nick Surprenant, Joe and Madeline Briggs, Diane and Guy Basciotta, Phil Pandolf, Michelle Gromo and her children, Joe and Laurie Siniscarco, and Patrick Zasa. She was predeceased by her maternal grandparents, Francis and Edith (LaDue) Barrella; paternal grandparents, Angelo and Margaret (Casaletta) DeSarro; numerous aunts and uncles; and in-laws, George S., Sr. and Anne A. (LaRocco) LaNeve, Mary Anne Devendorf, George LaNeve, Jr., and Michael LaNeve. The family is grateful to Dr. Sultana Razia and Dr. Kenneth Visalli for their professional concern and compassion. During her last days, the Rome Memorial Hospital Rehabilitation Department, especially John, unequivocally assisted MaryBeth and her family with great understanding and care. A note of appreciation as well to the administrator, Tony Joseph, for his kindness. The blessings of her priest and friend, Rev. James Cesta, were so touching and unforgettable. In addition, MaryBeth found the respect of a new friend, Terri, who made her feel so special. Thanks also to her neighbors and friends of the Applewood Community. The family will honor MaryBeth’s life at a private time at St. Mary of Mt. Carmel/Blessed Sacrament Parish where her Mass of Christian Burial will be offered. Memorial contributions in MaryBeth’s honor may be made to St. Mary of Mt. Carmel/Blessed Sacrament Parish online at http://www.mountcarmelblessedsacrament.com/ or by mail to 648 Jay St., Utica, NY 13501 or the Mother Marianne’s West Side Kitchen online at https://mmwsk.org/ or by mail to 702 Columbia St., Utica, NY 13502. “You never know how strong you are until being strong is the only choice you have.” https://youtu.be/HXC3RHbCXtQ “Look for the Good”

The family of Mrs. MaryBeth (DeSarro) LaNeve created this Life Tributes page to make it easy to share your memories.

Send flowers to the LaNeve family.