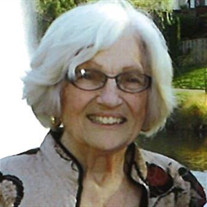 UTICA - Mrs. Mary (Kracinovich) White, age 89, passed away on Tuesday, January 7, 2020 at MVHS at St. Luke’s Healthcare with her loving family by her side. Born in Carbondale, Pennsylvania on March 18, 1930, Mary was the daughter of the late Stefan and Mary (Germaine) Kracinovich. She was raised and educated in Carbondale. On November 4, 1950 she wed William H. White with whom she shared 38 years in a loving marriage until his passing on March 21, 1989. At one time, Mary held a position at an IGA (Independent Grocers Alliance) supermarket, retiring from the clerical department. She was well known and well loved by her co-workers and customers. Mary and her husband treasured the memories of the gentleman’s farm they ran, prior to their retirement. They then relocated to Homosassa, Florida. William’s passing was unexpected, but Mary, a strong woman, went on to make many wonderful relationships in the Homosassa community. A benevolent woman, she also assisted the elderly with their needs. She was an excellent cook and baker, and she enjoyed playing card games. Very independent and social, she loved traveling to be with family and friends. Mary was a member of the Eastern Star, a Cub Scout Mother, and a member of St. Paul’s Episcopal Church in Angola, New York. Mary is survived by her daughters and sons-in-law, Donna J. and Fran A. Redmond, and Mary K. and Michael Benz; her sons and daughter-in-law, William H. and Elizabeth White, and Wayne H. White; grandchildren, Shannon Redmond, Tara and Andy Anguish, Francis Redmond and Mercedes Hensel; Megan and Dan Brown, Bradley Southworth and fiancée Isabella Deveso, twins William Benz, and Lilly Benz; Benjamin C. White, Jay A. and Michelle White; Adam J. and Jamie White, Amanda L. and Greg Craven, Aston R. and Luanne White, and Aaron White; her 10 great-grandchildren; sister and brother-in-law, Milicente and John Murphy; and brother, Thomas Kraycinovich; sisters-in-law, Helen Kracinovich, and Joyce Martin; nieces, nephews, great-nieces, great-nephews, cousins, in-laws and friends. She was predeceased by her beloved siblings and their spouses; and daughter-in-law, Nola White. In keeping with Mary’s wishes, there will be no public visitation. The family will honor and celebrate her life at a future date.

UTICA - Mrs. Mary (Kracinovich) White, age 89, passed away on Tuesday, January 7, 2020 at MVHS at St. Luke&#8217;s Healthcare with her loving family by her side. Born in Carbondale, Pennsylvania on March 18, 1930, Mary was the daughter of the... View Obituary & Service Information

The family of Mary (Kracinovich) White created this Life Tributes page to make it easy to share your memories.

Send flowers to the White family.