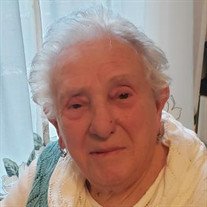 UTICA - Mrs. Mary “Maria” (Cavo) Colucci, age 94, went home to the Lord while in the comfort and dignity of her home, surrounded by her loving family who was caring for her until her passing on Monday, March 30, 2020. Born in Brooklyn, NY, on October 12, 1925, Mary was the daughter of the late Vincenzo and Giovannina (DiPalma) Cavo. After her mother passed away, Mary at a very young age returned to Erchie with her family, a picturesque village dotted with vineyards and lemon groves on the Amalfi Coast of Italy where she was raised and educated. In 1947, Mary returned to the United States and met the love of her life, Michael D. “Mike” Colucci. On May 1, 1948 they married and became one soul and one heart. They honored their vows, made family a priority, and found trust in the providence of the Lord. Mary and Mike were blessed with 69 loving years prior to his passing on November 8, 2017. Mary’s vocation in life was caring for the wellbeing of her family on many levels. She was a beloved matriarch, maintaining a warm, welcoming home.... and she was always in charge! She was famous for her cooking, especially preparing holiday meals presented in an old world style. She was proud of her home and worked so hard to set an example for her children to follow. A benevolent woman, she was concerned for others and was affectionately known as “Mama Mia” because her generosity and hospitality were extended to all. Those were the best days of her life. Mary had strength of character that carried her forward in the face of adversity, with faith and family first and foremost in her mind and heart. She enjoyed traveling, especially to Italy to see family, and in later years she had the fine motor skills for adult coloring. She liked the excitement of going to the casino with her family and nothing could compare with the time she shared with her loved ones. A devoted communicate of St. Anthony & St. Agnes Church, she and her family donated tirelessly to the success of many of the church activities. Her many acts of goodness brought her closer to the Lord through doing his work. She could always be counted on. During her life, Mary had the love, company, and respect of her entire family. Nothing could have made her happier, and for that, she was eternally grateful. Mary is survived by her children and their spouses, Carmella Marie De Carlo (and the memory of her son-in-law, Mario De Carlo), Dominick Sr. and Linda Colucci, Vincent and Virginia Colucci, Ann Colucci Duesler, Anthony and Frances Colucci, and Joann and Kevin Kortright; her cherished grandchildren, Dominick Jr. and Jessica Colucci, Angel and Roger Squires, Kelly and Darryl Yaddaw; Nicholas and Kristin Colucci, Mark and Audra Colucci; Terra and Florian Waitl, Nerissa Colucci, Anthony Colucci; and Kevin R. Kortright; she adored her 19 great-grandchildren; and her brother and sister-in-law, Raffaele and Fiorina Cavo. She also leaves many nieces, nephews, great-nieces, great-nephews, cousins, especially Maddalena Battista and her family; dear family friends, the DiPierro family, and Barbara Barry; and the special friends who have blessed her life throughout the years. She was predeceased by two children who passed in infancy; brothers and sisters-in-law, Nunzio and Mario Cavo, Samuel and Yolanda Cavo, and Vincent Cavo; and her dear friend, Concetta DiPierro. Due to current health concerns and in keeping with federal and state regulations, services will be held privately. A Celebration of Life will be planned by the family at a date to be determined.

UTICA - Mrs. Mary &#8220;Maria&#8221; (Cavo) Colucci, age 94, went home to the Lord while in the comfort and dignity of her home, surrounded by her loving family who was caring for her until her passing on Monday, March 30, 2020. Born in Brooklyn,... View Obituary & Service Information

The family of Mrs. Mary "Maria" (Cavo) Colucci created this Life Tributes page to make it easy to share your memories.

Send flowers to the Colucci family.