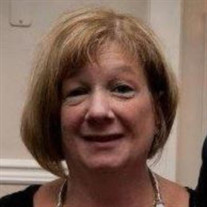 WHITESBORO - Mary Ann (Mayhew) Jones, age 64, passed away unexpectedly on Saturday, September 25, 2021 in the comfort and dignity of her home. Born in New Hartford on July 17, 1957, Mary Ann was the daughter of the late Clifford A. and Constance D. “Connie” (Vedete) Mayhew. After receiving her primary education at Lincoln Elementary School in Utica, the family moved to Whitesboro where Mary Ann graduated from Whitesboro Senior High/Class of 1975. At one time, she was married to Michael H. Jones and to that union came the blessing of two children. They remained cordial in the years that followed. Mary Ann was a longtime employee of the Metropolitan Insurance Company for a number of years. She then worked for the United States Postal Service as a Sorter at the Main Office on Pitcher Street. She later accepted a position at Rome Memorial Hospital as an Administrative Assistant in the Medical Imaging Department. On July 31, 2018 she concluded her working career due to ill health. For Mary Ann, family came first, and she was selfless in fulfilling their needs. Humble and kind, her caring heart awarded her many friendships. She worshipped the sun as a form of relaxation. Her dog, a German shepherd named “Hero”, was always by her side as her protector and companion. She lovingly tended to him until he passed away several years ago, …and she missed her Hero to her last days. The Hallmark Channel was a great source of entertainment to Mary Ann. She was a great baker, and her generosity unfolded, especially during the holidays, when she would prepare her delicate pusties, 20+ varieties of cookies, and her masterful trays that were rich in traditions and family love. She also showed her creativity when it came to making floral arrangements. Her greatest accomplishment was being a loving Mom who made sure her kids had what they needed and what she wanted for them, once again showing her generous heart. Mary Ann believed in the Lord and when able to she practiced her Catholic faith at Our Lady of the Rosary Church. Mary Ann is survived by her children and their loves, her son Michael G. Jones and Toni Bartolomie; and her daughter Melissa A. Jones and Dennis Vazquez; and her brother and sister-in-law, Nick L. and Lorraine Mayhew. She also leaves her nieces and nephew, Angela Mayhew, Nicholas J. Mayhew, and Katie M. Mayhew; cousins, including Lori and Paul Totaro, Steven and Karen Vedete, Sharon and Andy Scarafile, Mike, and Tina Mayhew; and her in-laws, members of her former husband’s family. She also shared a treasured and special friendship with her friends, Patti Doherty, Elaine and John Evanowski, and Georgie Lisandrelli. She was predeceased by her aunts and uncles, Angela Vedete, Louie N. Vedete, Nick and Janet Vedete, and Jay and Frances Mayhew. The family extends their appreciation to the EMS of the Whitesboro Volunteer Fire Department and the Central Oneida County Volunteer Ambulance Corps (COCVAC) for their valiant efforts; and the nurses and staff of MVHS at St. Elizabeth Medical Center for their medical expertise and unrelenting efforts. Visitation will be held Wednesday evening, September 29, 2021 from 5:00–7:00 at the Eannace Funeral Home, Inc., 932 South St., corner of Hammond Ave. Memorial contributions in Mary Ann’s honor may be made to the Central Association for the Blind and Visually Impaired (CABVI) online at https://www.cabvi.org/#donate; envelopes will also be available at the funeral home. Relatives and friends are respectfully invited to attend Mary Ann’s funeral service and Celebration of Life which will commence on Thursday morning, September 30, 2021 at 10:00 from the funeral home and at 11:00 at Our Lady of the Rosary Church where her Mass of Christian Burial will be offered. Interment will take place in Mt. Olivet Cemetery at the convenience of the family.

WHITESBORO - Mary Ann (Mayhew) Jones, age 64, passed away unexpectedly on Saturday, September 25, 2021 in the comfort and dignity of her home. Born in New Hartford on July 17, 1957, Mary Ann was the daughter of the late Clifford A. and Constance... View Obituary & Service Information

The family of Mary Ann (Mayhew) Jones created this Life Tributes page to make it easy to share your memories.

Send flowers to the Jones family.