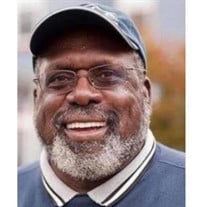 UTICA - Mr. Marron W. “Butch” McLeod, age 78, unexpectedly yet gracefully went home to the Lord on Friday, January 1, 2021 when he passed away in the comfort and dignity of his home. Born on September 4, 1942, Marron was the son of the late Baum Jr. and Flossie (Gregg) McLeod and he is the grand-nephew of Mary McLeod Bethune, founder of Bethune Cookman University in Daytona, Florida. He was a graduate of Utica Free Academy/Class of 1960. A proud veteran, Butch enlisted in the United States Army where he served his country with honor from 1962-1965 during the Vietnam War era stationed overseas in Germany as a marksman with the 3rd Battalion. He chose to continue his commitment serving as a Reservist until 1968. At one time, he was married to the former Patricia Talford and to that marriage came the blessing of their daughter. He found love again in his life partner, Carol Green. They were inseparable in sharing each other’s passions and activities of everyday life. They truly loved one another. Butch was employed by the Niagara Mohawk Power Corporation for a multitude of years as a Meter Reader Specialist, retiring in 2007. A gentle giant with a huge heart of gold, he was destined to be a guiding angel in so many ways. His kind words were genuine. As a father, through Scripture and prayers, he was the voice of reason. At any life event, he stood by his daughter’s side for which she finds herself fortunate. Having a sense of humor was an understatement, and he had a comedic story for everything. His renditions were so descriptive and his animations played it up. It was almost as if you were there, as a character in his narrative. Marron was a faith-loving, God-fearing prayer warrior. He was a long-time member of the Hope Chapel A.M.E. Zion Church on South Street. His dad taught him to garden in the backyard, and as his tending of the soil and planting of the crops progressed, collaboratively they established the Eagle and Miller Streets Community Garden which yielded all varieties of vegetables and fruits that thrived through their tender loving care. The children of Martin Luther King Elementary School planted sunflowers that served as sentinels of the harvest. The Garden gained national notoriety when the Obama Administration awarded Marron the recognition as the Best Community Leader in the Utica area. A moment in time where he was extremely proud. He and his brother Harold visited the White House during the Obama administration, where he was in awe that his daughter orchestrated the event. Marron took pride in his heritage and the wisdom of his ancestors in their advocacy for Black educational equality and excellence. It is often noted that when we come from good stock, we have our own way of blossoming. Butch was born with rhythm and soul and his choice of music reflected that. He was an amateur photographer, and a social butterfly. His height would make us feel inclined that he was drawn to the game of basketball which he played in his youth and was proud to be part of the Cosmopolitan League for 40 years old and older. He followed Syracuse University sports and (excitedly) supported the Buffalo Bills; fan of the Utica Hockey and the Washington team games were a favorite because of his granddaughter being one of their professional NFL cheerleaders. He was a fan of the Utica Hockey leagues and attended the Harlem Globetrotters who were an exhibition team. Marron was affiliated with a myriad of civic, charitable, and patriotic endeavors and memberships. Among them, American Legion Utica Post #229, Parkway Senior Center where he taught the skill of gardening, oversaw the Community Garden, Boilermaker, Utica Parades, Cosmopolitan Center, Youth programs, Good Old Summertime, Soul days, family reunion committees, sporting events, and Veteran Affairs outreach. His benevolence and vision transformed not only the landscape, but the lives of the people in the Utica neighborhoods. Marron is survived by his cherished daughter, Shannon Steward (Derrick), grandchildren, Ashley Cottrell, and Anthony Steward; his life partner, Carol Green; siblings, Mary Lacy (John), and Judge James A.W. McLeod. He also leaves his beloved sister-in-law, Pearlene McLeod and memories of his predeceased brother and best friend Harold J. McLeod, his sister, Karen Z. McLeod; and his niece, Jessica M. McLeod. He will also be remembered by a host of nieces, nephews, great-nieces, great-nephews, and cousins. The family extends sincere appreciation to the Utica Police Department officers who extended empathy and solace to the family; Dr. Roger Norton, longtime physician who provided medical care to Butch; his nephews, Jeffrey and Brian, who were amazing in caring for him. Words can never express how grateful we are to all of you. The family will honor and commemorate Butch’s life at a private time. Interment in Forest Hill Cemetery will be held privately and at the convenience of the family. During this time of social distancing that we are all experiencing, please take a moment to connect with Butch’s family through the “Memories” section of his obituary. Our prayers go out to all as a sign of our continued support.

The family of Mr. Marron W. "Butch" McLeod created this Life Tributes page to make it easy to share your memories.

Send flowers to the McLeod family.