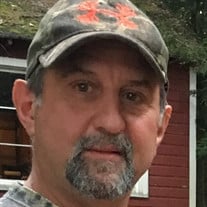 PITTSBURGH, PENNSYLVANIA - Mark J. Scarafile, 59, of East Liverpool, Ohio passed away in the arms of his children on Wednesday, June 9, 2021 at West Penn Hospital in Pittsburgh, PA after a short illness. Mark was born in Utica on September 17, 1961. He was a graduate of New Hartford High School/Class of 1980 and Riverside School of Aeronautics in Utica. He worked at Pittsburgh International Airport for 37 years as a quality control supervisor for American Airlines. In this supervisory position Mark made numerous trips to Germany to act as a liaison handling many aspects such as planning, testing, inspecting, and coordinating the purchase of new airplanes. Mark had a passion for rebuilding and restoring automobiles. Some of his greatest restorations included his Jeeps and Pontiac GTO which he built from the ground up. Mark loved visiting his family’s property in upstate New York, spending time in the Adirondacks, and hunting and fishing his favorite spots. He also enjoyed cooking for his family and listening to music. His greatest pride and joy were his two children. Mark’s loving family includes his parents, Elizabeth “Liz” (Russo) Scarafile and the late Angelo “Angie” Scarafile; son, Salvatore Scarafile; daughter, Santina and her husband Ben Kenney; two brothers, Andy Scarafile and his wife Sharon, and Michael Scarafile; his late sister, Laurie Riffle; many aunts, nieces, nephews; former spouse and mother of his children, Christy Scarafile; and his significant other, Christina Sussmann. Friends may visit at the Eannace Funeral Home, Inc., 932 South St., corner of Hammond Ave. on Thursday from 4:00-7:00 p.m. where Pastor David Ossenfort will officiate services at 7:00 p.m. upon conclusion of visitation. Burial will take place in Calvary Cemetery at the convenience of the family.

PITTSBURGH, PENNSYLVANIA - Mark J. Scarafile, 59, of East Liverpool, Ohio passed away in the arms of his children on Wednesday, June 9, 2021 at West Penn Hospital in Pittsburgh, PA after a short illness. Mark was born in Utica on September... View Obituary & Service Information

The family of Mr. Mark J. Scarafile created this Life Tributes page to make it easy to share your memories.

Send flowers to the Scarafile family.