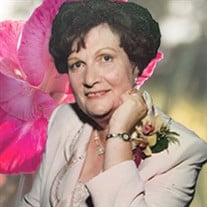 UTICA – Mrs. Maria “Nina” (Buttitta) Spano, age 88, passed away Thursday, March 10, 2022, with her loving husband and daughter by her side. Maria was born in Bagheria, Sicily, on August 1, 1933, to the late Giuseppe and Concetta (Gagliano) Buttitta. She was raised alongside her three sisters in Italy, where she remained until her relocation to the United States as a young bride. On October 18, 1956, Nina married Louis “Luigi” Spano, a young man who she had known in her youth. Luigi was already living in Utica, having earlier migrated here from Bagheria, and he courted Nina through letters. He then traveled back to Bagheria to marry her. Together, the couple moved to the U.S. in the Utica area, where they made their home and shared 65 loving and devoted years with each other. Nina, having made this long-distance move to be with her husband, was the first of her family to do so, which stands as a testament to her bravery. Nina helped to support her family through her work at the Joseph & Feiss Company, a manufacturer of men’s suits. While there, her warm and friendly nature enabled her to make numerous wonderful and life-long friends. Nina was a loving caretaker who delighted in providing affection to her daughter, husband, family and friends. Nina was truly a generous and hospitable woman. Additionally, she was a wonderful cook who enjoyed cooking elaborate specialties for her family. Drawing on her Sicilian roots, Nina loved making her legendary specialty: sauce and meatballs. She would send care packages of them home with Rosemary, her husband and kids when they visited. Other specialties Nina loved to make were stuffed artichokes, peppers and cabbage, and arancini. Nina was an incredibly kind woman who deeply loved her family. When she first moved to Utica, she was a bit lonely for her family-of-origin she had left behind. Eventually, she was able to help facilitate two of her sisters’, Caterina’s and Agata’s, relocation to the United States. To have her sisters and their families so close again thrilled Nina! Between the three sisters and their families, as well as Louis’s family, there were many opportunities for get-togethers that created countless treasured memories for all. Some of the most memorable times were those of the “beach” trips with family and friends, which included extensive “picnics” with lots of food. With a heart of gold and a zest for life, Nina was cherished by all of her extended family and her friends. Nina and her husband were instrumental in together laying a foundation for their daughter to achieve success. Their daughter meant the world to them. When the time came for Nina and Louis to become grandparents, they were overjoyed and grateful for the opportunity. She was ready to partake in her grandchildren’s lives with the same enthusiasm and love she’d had for her daughter; her grandkids would become her pride and joy. Nina was a deeply spiritual woman with a strong faith. Nina is survived by her beloved husband, Louis “Luigi” Spano; and her treasured daughter, Rosemary Spano and her husband Aaron Stern. She will live on in the hearts of her cherished grandchildren, Eric Stern, and Margareta Stern; and her beloved sister, Caterina Ventimiglia. She leaves behind her nieces and nephews, Josephine and Robert Mazzorana, Anthony and Donna Caltagirone, Rosemary and Jay D’Agostino, Anthony Scaduto and Connie Castronovo, as well as other beloved nieces and nephews in California, Wisconsin and Sicily. She also leaves behind her great-nieces and great-nephews in Utica, Dan Mazzorana, and Claudia Mazzorana and fiancée Michael Carcone; Zachary, and Matthew Caltagirone, and Katelyn and Dan Cleary; as well as other beloved great-nieces and great-nephews. Nina was predeceased by her sisters and brothers-in-law, Agata and Diego Caltagirone, and Domenica “Mimmi” and Luigi Graziano. She was also predeceased by brother-in-law and sister-in-law, Albert and Sandy Spano; and sister-in-law and brother-in-law, Josephine and Joseph Scaduto. The family would like to extend their gratitude to the loving and kind aides, staff, doctors, and nurses at the Masonic Care Community for providing outstanding care and compassion to Nina. The family would also like to extend a “thank you” to Nina’s beloved sister Caterina, and to Nina’s Utica- based nieces, nephews, and their families – all of whom lovingly supported Nina and her needs. Visitation will be held morning on Friday, March 18, 2022, from 10:45 to 11:45 at the Eannace Funeral Home, Inc., 932 South St., corner of Hammond Ave. Memorial donations may be made in Nina’s memory to the Alzheimer’s Association, online at: alz.org/?form=alz_donate. Nina’s Funeral Service and Celebration of Life will follow at 12:00 noon at the funeral home.

The family of Mrs. Maria "Nina" (Buttitta) Spano created this Life Tributes page to make it easy to share your memories.

Send flowers to the Spano family.