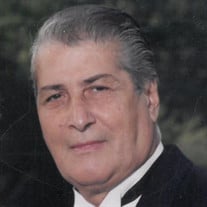 WHITESBORO – Mr. Louis “Luigi” Spano, age 86, passed away unexpectedly on Wednesday, March 30, 2022, and was reunited with his beloved wife—who passed only twenty days before. His devoted daughter Rosemary was by his side. Luigi was born in the town of Bagheria, in Sicily, Italy on September 9, 1935 to the late Peter and Rosa (Graziano) Spano. He came to the U.S. at the age of 15. An ambitious and hardworking man, Luigi sought after the American Dream which was to make a better life, find profitable work opportunities and provide for his family. Luigi had known his bride in his hometown of Bagheria. After the exchange of many letters between the two while courting, Luigi realized there could be no other woman for him. Nina, the former Maria Buttitta, was to be his wife and so Luigi returned to Bagheria to proclaim his commitment to her. The couple was wed on October 18, 1956, and soon after, they returned to the U.S., coming to call Utica their home. Luigi and Nina were then blessed with their daughter Rosemary, who greatly enriched their lives. Theirs was a marriage of their era. They shared 65 years together, always devoted to each other’s needs. Nina’s passing on March 10, 2022, coupled with his broken hip, proved too much. Luigi secured a position with G&L Meat Packing which introduced him to the meat packing industry. Luigi always spoke of Mike Lando, one of the owners, as his mentor and friend. In 1980, when a business opportunity presented itself, Luigi, a natural entrepreneur, and his partner, Jack Scibor, took the initiative and combined their knowledge and skill to create their own company—Regional Packing Corporation. Luigi thrived on the challenges of running a business. He was a born leader. The company was very successful. After many accomplished years, Luigi retired in 1994. Luigi had always dreamed of retiring to Florida, and after numerous travels found Boynton Beach to be his choice of location, thus, Nina and Luigi became “snowbirds.” Another of Luigi’s dreams was to build his own home in Whitesboro. In 2003, Luigi, after having “done his homework”, was able to construct a home that met his and wife’s needs; he numbered this among one of his most satisfying accomplishments. A charismatic, strong-willed, and ambitious man, Luigi remained bridged with his heritage. As a dad, he strongly encouraged his daughter to pursue her education and professional goals, and nothing made him prouder than all her achievements. He and Nina were ecstatic when their grandchildren, Eric Louis and Margareta Dora, came into their life. Having grandkids gave him a different mindset and he actively followed their pursuits of interest. They were the joy of his life and the focus of his stories; he was supremely proud of them. Luigi pursued several passions over the course of his life, such as fishing on local lakes in his fishing boat, and golfing with friends. During his winters in Florida, Luigi adored time spent with his “friend group” of fellow Italians, with whom he played friendly card games. They passed splendid time in each other’s homes, enjoying delicious dinners and indulged in the Florida lifestyle that was so vibrant. For Luigi, a topic of conversation began each day with what was on the menu to satisfy his palate. It was all about the food! He particularly enjoyed cooking his specialties. He was a master at making fried smelts, loved to grill meats and at Christmas, loved to prepare octopus. Food was a huge source of enjoyment and dining out at local establishments was so delightful for him. In looking back, he was a man who came from humble beginnings, accomplished great professional success, was in a fruitful marriage that made him very happy, and knew the blessings of a devoted daughter, son-in-law, and adoring grandchildren. Luigi is survived by his “one and only” daughter, Rosemary Spano and her husband Aaron Stern. He will live on in the hearts of his grandchildren, Eric Louis Stern, and Margareta Stern. He was predeceased by his sister and brother-in-law, Josephine and Joseph Scaduto, and by his brother and sister-in-law, Albert and Sandy Spano. He leaves behind his nieces and nephews, Connie Castronovo, Rosemary D’Agostino, Anthony Scaduto; Rosemary Dolan, Fran Fratt, Peter Spano, Jody Duncan, Vito Spano; Josephine Mazzorana, Anthony Caltagirone; and their spouses and children; as well as other beloved nieces and nephews. Luigi will be fondly remembered by his great-nieces and great-nephews in Utica, Dan, and Claudia Mazzorana; Zachary, and Matthew Caltagirone, and Katelyn Cleary; as well as other beloved great-nieces and great-nephews. Luigi also leaves behind his sister-in-law, Caterina Ventimiglia, who was predeceased by her late husband Peter. He was predeceased by his sisters-in-law and brothers-in-law, Agata and Diego Caltagirone, Domenica “Mimmi” and Luigi Graziano; and by his father-in-law and mother-in-law, Giuseppe and Concetta (Gagliano) Buttitta. The family would like to extend a sincere thank you to the Masonic Care Community of New York, Manhattan Household, for their absolutely outstanding medical care and attention. They would especially like to extend their gratitude to Dr. Elif Erim; Luigi adored her as an incredibly skilled and compassionate physician; to Sheila Collea, the social worker who supported him in so many ways; to all his aides, who were tender and fussed over him; and to the compassionate and kind nurses and staff. Visitation will take place on Monday morning, April 4, 2022, from 10:15-11:00 at the Eannace Funeral Home Inc., 932 South St., corner of Hammond Ave. Luigi’s Funeral Service and Celebration of Life will commence at 11:00 at the funeral home. Entombment will immediately follow in Christ Our Savior Mausoleum at Calvary Cemetery. By family request, please omit floral offerings. Memorial contributions may be made to the American Heart Association online at https://www.heart.org/; envelopes will also be available at the funeral home.

The family of Mr. Louis "Luigi" Spano created this Life Tributes page to make it easy to share your memories.

Send flowers to the Spano family.