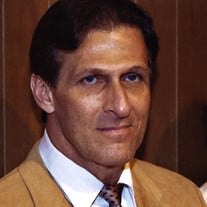 UTICA - Mr. Louis E. Hamo, age 66, joined his mom when he passed away on Friday, February 21, 2020 at MVHS Rehabilitation & Nursing Center. Born in Utica on July 10, 1953, Louis was the son of the late Raymond J. and Florence A. “Fluffy” (Piccione) Hamo. He was a graduate of T.R. Proctor High School/Class of 1971. Upon graduation, Lou enlisted in the United States Air Force and faithfully served his country for 4 years. While in service, he learned the procedures and details of working in a Dental Laboratory. After his honorable discharge, he relocated to Boulder, Colorado and later Las Vegas, Nevada where he worked at various construction trades. He returned to Utica in 2007 to be with family, and he proudly made his home with his mom and watched over her wellbeing. During his life, Lou was a free spirit and a man of faith. He had a sharp memory and was a historian of United States Presidents and the facts of the legacies each one left. When it came to family affairs, he remembered it all and was referred to as the “family history Wikipedia”! As a sportsman, he took an interest in Track and was also an avid golfer at the fairways of Valley View where he became masterful at the sport. Lou maintained a lifestyle that enabled him to set his eyes on a destination,… and there, the adventure began. He found the most joy in hiking the Colorado Rockies. Tales from his travels, and a ready-and-willing audience in his loving family were the prerequisites that allowed Lou to become a sensational storyteller. He looked forward to the yearly Piccione family picnics where he got to see and reunite with loved ones and make precious memories. Lou is survived by his siblings and their spouses, Raymond J. Jr. and Susan Hamo, David J. and Laura Hamo, and Laurice McCallister; nieces and nephews, Arica Hamo, Mathew and Amy Zabek, Sarah and Joseph Doti, Andrea and Derek Natoli; Eric Hamo, Evan Hamo, Janelle Hamo; Alex Rau, and Alana Rau; great nieces and nephews, Mila, Ilaria, and Roczen; many beloved cousins and his uncle, Rocco A. Piccione. His great friends, Joseph Leo, Gary Cassia, Rob Imundo, and Mike Nowacki. He was predeceased by his uncles and aunts, Louis and Beatrice Piccione, Charles and Doris Piccione, Dolores Piccione, Carmela and Paul Sardina, Theresa and Robert Marrone, Kathryn and Lawrence Hammill, Antoinette and Frank Yacco, Josephine and Harry Kennedy, and Mary and Dan Olivadoti. The family is grateful to Dr. Charles Eldredge and Dr. Ahmad Mian for their compassionate and dignified care; the staff of MVHS at St. Elizabeth Emergency Department and ICU; MVHS at St. Luke’s/1st Floor staff; and ultimately MVHS Rehabilitation & Nursing Center personnel with the guidance of Dr. Janki Patel, and Dr. John Pylman. The personnel of all the facilities rendered professional, empathetic care to Lou during his stays. The family holds close to their hearts the love and dedication of their brother and sister-in-law, Ray and Sue who “made things happen”. The family honored and commemorated Lou’s life during his last days. A Memorial Gathering of family and friends will be held at a later date and time. Inurnment will take place in Calvary Cemetery at the convenience of the family.

The family of Mr. Louis E. Hamo created this Life Tributes page to make it easy to share your memories.

Send flowers to the Hamo family.