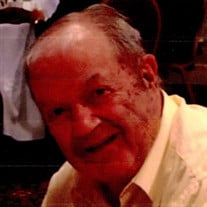 UTICA - Mr. Louis S. Comito, age 87, went home to the Lord on Friday, September 25, 2020. At the time of his passing, he was in the hearts of those he loved most. Born in Utica on August 23, 1933, Louis was the son of the late Joseph and Rose (Alito) Comito. He also knew the love and respect of his late step-father Frank Luizzi. He was a graduate of T.R. Proctor High School/Class of 1951 and continued his studies at MVCC graduating in 1953. He then pursued collegiate courses at Syracuse University where he earned his Bachelor of Arts degree in Electrical Engineering in 1957. On April 7, 1956 he married his childhood sweetheart Esther Vito with whom he shared 64 years in a unique marriage that was blessed with children and a beautiful family life. Louie worked at the General Electric Company at their French Road location for 10 years prior to accepting a position at Griffiss Air Force Base in Rome where he enjoyed a 30-year career in his profession as an Electrical Engineer. Concurrently, he was employed by MVCC as an adjunct professor teaching Advanced Mathematics courses including Calculus. Louie was a lighthearted man, a true friend, and a compassionate confidant. He was also a benevolent soul. A parishioner of St. Anthony & St. Agnes Church, he was deeply devoted to Mass, attending daily during Lent, and on Palm Sunday their home was open all day for family and friends. He practiced his Catholic faith by honoring the Holy Days of Obligation, and he believed in his Lord. He also volunteered at the church’s annual June feast celebrating St. Anthony, and the September festival honoring St. Cosmas & St. Damian. He was a great cook, and his meatballs, “extra hot” sausage roll, and marinara sauce were the best! These were memorable times in their lives, and Louie captured snap shots of those “Good Ole Days” through the lens of his camera. He loved to meet his friends for breakfast at Marr-Logg’s and Dave’s Diner. During his high school days, Louie was a natural gymnast and he later became a judge for Gymnastic competitions for local schools. He always enjoyed fishing, and bringing food to everyone! Above all Louie’s blessings, his grandchildren were the light of his life. He was at his daughter’s home every day and was a second father because of the love he showed to them. During his retirement years, he would spend every day with them, …he was the best! He was an unforgettable man and has left a legacy of incredible memories and laughter that will grace and bless hearts of all who knew him. Louis is survived by his devoted wife, Esther; his daughter, Lisa Comito-Bell (and the memory of her late husband Anthony); son and daughter-in-law, Steven P. and Felicia Comito; grandchildren, Anthony Bell and Sarah Dooley, Miranda Bell, Christian Bell; Matthew and Olivia Pray; and great-grandchild, Koah Pray; although Louis never got to meet his great-grandson Koah, he was smitten and the love he showed was palpable; his sister and brother-in-law, Barbara and David Kearney; in-laws, Mary Lourdes Comito-Chiffy and husband Frank, Lorraine Liuzzi (and the memory of Louie’s late brother Raymond), and step-brother, Frank Liuzzi. He was also predeceased by his sisters and brothers-in-law, Katherine “Katie” and Arthur DelMedico, Patricia and Anthony Orsaio, Helen and Lawrence O’Brien, and Lucille and Stanley Kuznia; brothers and sister-in-law, Joseph Comito, Peter and Delores Liuzzi; and in-laws, Alice Rebecca Liuzzi, Antonio and Nellie Vito, Pauline and John Marchitelli, and Marie and Frank Iagnocco. Esther and her family are appreciative of UFD Rescue Teams from Bleecker and Mohawk St. Firehouses for always responding with kindness and their great assistance. Relatives and friends are respectfully invited to attend Louie’s funeral service and Celebration of Life which will commence on Thursday, October 8th at 1:00 p.m. at St. Anthony & St. Agnes Church where his Memorial Mass of Christian Burial will be offered. Face coverings are required and social distancing and contact tracing will be implemented. Expressions of sympathy in lieu of flowers may be considered to the Stevens-Swan Humane Society online https://stevens-swan.org/donate/. Envelopes will be available at the service. Arrangements have been entrusted to the Eannace Funeral Home, 932 South St., corner of Hammond Ave. Please take a moment to connect with Louis’ family through the “Memories” section of his obituary. Our prayers go out to all as a sign of our continued support. “A New World in the Morning” https://www.youtube.com/watch?v=r9nz_KfxSAM

The family of Mr. Louis S. Comito created this Life Tributes page to make it easy to share your memories.

Send flowers to the Comito family.