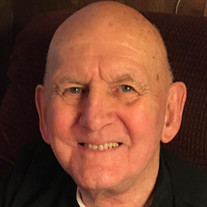 UTICA – Mr. Keith J. Ballard, Sr., age 84, went home to the Lord on Tuesday afternoon, January 25, 2022, in the comfort and dignity of his home, where he had been lovingly cared for by his daughter Catherine and his family. Born in Ilion on March 30, 1937 to the late Tilman and Anna (Pickett) Ballard, Keith was raised and educated locally. He attended and graduated from St. Francis DeSales School/Class of 1955. Keith then went on to attend Mohawk Valley Community College and enlisted in the U.S. Navy. He proudly served his country from 1956 to 1960, and would always remain a proud veteran. On July 10, 1965, Keith married his wonderful lifetime partner, the former Leona E. Brown. The couple shared 43 years together before Leona passed on December 7, 2008. The pair was fortunate, for their relationship exemplified their shared philosophy of building a committed marriage on a solid foundation, life-long partnership, and mutual trust. Keith was a quiet man who loved anything to do with his family. In his earlier years, Keith found employment at Diamonds Market. After that position, Keith shifted to a role he held for over 33 years: Principal Stores Clerk with NY State at the Mohawk Valley Psychiatric Center. Keith held this position until his retirement in 1996. Keith is remembered as a caring and compassionate man. He was kind to all those he knew, and went out of his way to meet and know each of his neighbors. Keith could be counted on in a moment of need, as he enjoyed being there for others and always offering his loving heart. He had the singular ability to give his vulnerable and authentic presence generously to others. Keith was often actively involved with the Parkway Senior Center in Utica. Additionally, he enjoyed traveling up north, always at different times of the year with his beloved Leona. He also enjoyed video recording any special family events. However, Keith was especially devoted in his involvement in his faith community. Very active in his faith, Keith was a strong believer in the Catholic Creed who loved his church and honored God by offering all of himself – from his heart to his service. He was a parishioner at St. Mary of Mt. Carmel/Blessed Sacrament Parish, where he volunteered weekly as an usher, as well as anywhere else his involvement would be helpful with church activities. Keith is survived by his cherished daughters, Catherine “Cathy” Ballard, and Shirley and husband Matthew Damico; as well as his sons and daughters-in-law, Daryl and Judith Ballard, Keith Jr. and Dawn Ballard, Richard and Shari Lynn Ballard, and Mark Ballard and Rachel Ruscito. Keith held close to his heart his daughter Cheryl A. Hertel, who passed away September 20, 2007. He will be fondly remembered by his grandchildren: Michael Ballard; Madison Lee Damico; Chastity, Brittany, and Amber Ballard; Joseph Saunders, Jessica Montonaro; Keith Richard, Christopher Stevens, Korey Ballard; Chad Johnston, Scott Johnston, Andrew Johnston, and Gregory Torres. Keith also leaves behind many great-grandchildren, and his in-laws, Harriet LaBrake, Sister Shirley Anne Brown, S.S.J., Mary Gilette, and Ed Brown. Keith was predeceased by his siblings and their spouses, John A. “Jack” Ballard and his first wife, Jean (Brown) Ballard and his second wife, Mary F. (Lukasewicz) Synakowski Ballard; Gerald and Bernice Ballard, Donald Ballard, Kenneth Ballard, Robert and Betty Ballard, Mary and William Daniels; and Dorothy Ballard; Keith’s father-in-law and mother-in-law, Richard and Catherine (Perry) Brown; and his sisters-in-law and brothers-in-law, Barbara Garrand, Rita Brown, Richard Brown, Harold and Gloria Brown, Pat Brown, and infant Robert Brown. The Ballard family would like to extend their gratitude to the entire staff of Hospice and Palliative Care, especially to the chaplain Walter Plock, as well as to Keith’s loving granddaughter Brittany for her extraordinary loving care and support. The family would also like to extend a special thank you to longtime family friend and neighbor Judy Williams, and to Fr. Bob Kelly for his spiritual guidance and visits. Visitation will be held on Wednesday, February 2, 2022 from 5:00 to 7:00 pm at Eannace Funeral Home Inc., 932 South St., corner of Hammond Ave. Relatives and friends are respectfully invited to attend Keith’s Mass of Christian Burial with Military Honors by the U.S. Navy on Thursday, February 3, 2022 at 11:00 am at St. Mary of Mt. Carmel/Blessed Sacrament Parish, 648 Jay Street. Regardless of vaccination status, face masks will be required to remain in compliance with the state and county mask order. Interment will take place at Calvary Cemetery at the convenience of the family.

UTICA &#8211; Mr. Keith J. Ballard, Sr., age 84, went home to the Lord on Tuesday afternoon, January 25, 2022, in the comfort and dignity of his home, where he had been lovingly cared for by his daughter Catherine and his family. Born in Ilion... View Obituary & Service Information

The family of Mr. Keith J. Ballard, Sr. created this Life Tributes page to make it easy to share your memories.