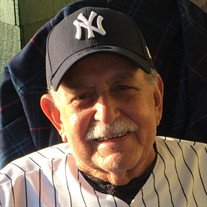 CLINTON - Mr. Juan Peña, age 79, passed into the arms of our Lord on Friday, October 15, 2021, after suffering from diminishing health conditions; his devoted wife was by his side. Born in Bonao, Dominican Republic, on November 22, 1941 to the late Carlos and Juana (Rosario) Peña, Juan went on to be a Marinero in the navy on the island and was proud of his service. Juan was fortunate to find true love with his wife of 36 years, Delia Irizarry. As a young man, Juan moved with his family to the Bronx and Queens in New York City, which he considered his first home. From there, he moved to Utica in 1987, to be closer to family. While in the Bronx, he opened up a bodega, and then expanded to Manhattan and Hoboken, NJ. Juan was always a business man – from morning to night – and was always prepared for a hard day’s work. He was very committed to the success of his bodegas, and often worked seven days a week to ensure that. He was organized and dedicated to providing a quality product to his customers; he was especially known for his excellent deli-Cuban sandwiches. In fact, they were so popular that people had to wait in long lines and dining was “standing room only!” His career in catering to patrons spanned 30 years. After retiring, he relocated to Clinton where he continued his venture in the grocery industry by taking a job at the Hannaford in Clinton. There, as is consistent with Juan’s impeccable work ethic, he was known for keeping the store spotlessly clean. The match of Juan to the company was one made in Heaven, and Juan was well known to customers for his friendly service and hospitality. While in New Jersey, Juan became a citizen of the United States in June of 1999. Juan was a humble and simple man who left behind a legacy of kindness and his many values: honor, diligence, hard work, love for the Lord, and love for family. He was a wonderful Papa, instilling his work ethic in his children and generous in sharing his laughter, and his grandchildren adored him! Juan always wanted to be with them, there was no greater love than that. Juan embraced many hobbies and passions, including his unwavering loyalty to the New York Yankees. He was a Yankee Encore Classics fan, enjoyed the sport anchors from years ago, and was proud to take his kids to games when he could. Juan also loved going on getaways to the Poconos. He treasured the times spent at the Great Wolf Lodge with the family, and took advantage of the casino to test his chances – it was an all-in-one vacation destination! Finally, it is important to note that Juan knew and loved our Lord. Juan’s greatest life accomplishment is revealed by the way his family cared for him in his time of need. Their loving support was both a blessing and a reward for all the hard work and responsibility Juan exhibited to provide for his family. Juan is survived by his devoted wife, Delia; his son and daughter-in-law, Joshua and Ashley Peña; and his daughter, Nicole Peña and Danny Zoeckler. Juan also leaves behind his adored grandchildren, Christopher Peña, and Charlotte Peña; as well as his additional children, Jorge, Jaime (Karen), Guillermo (Iris), and Olga, as well as their children; and a great-grandchild. He also leaves his siblings, Syvia, Carlos (Dary), Rosa, Margarita (Manuel), and Carmen. Juan was preceded by his additional brothers and sisters, Mercedes, Milagros, Mario, and Rafael. Also left to remember this good man are his many nieces, nephews, great-nieces, great-nephews, cousins; sisters-in-law and brothers-in-law, Miriam Irizarry-Aveir and her husband Elliot, Hilda Santiago and the late Danny Santiago, Norma and Osvaldo Gonzalez, Nicolas Irizarry, Jr., Angel “Tony” Irizarry, and the late Linda M. Irizarry-Kimball. Juan was predeceased by his father-in-law and his mother-in-law, Nicolas and Leonor (Genera) Irizarry. The Peña family would like to extend their appreciation to: Dr. Andrea Finnochiaro, who was a caring and guiding physician; the Abraham House (Utica), which was truly a peaceful place and whose staff was amazing in the compassionate care they provided to Juan and his family, making it much easier to embrace those difficult days. Visitation will be held on Friday evening, October 22, 2021 from 5:00 – 7:00 at the Eannace Funeral Home, Inc., 932 South St., corner of Hammond Ave. The Peña family will gratefully accept contributions made in Juan’s memory to the Abraham House online at https://www.theabrahamhouse.org/donate/; envelopes will also be available at the funeral home. Family and friends are respectfully invited to attend Juan’s Mass of Christian Burial, which will be held on Saturday morning, October 23, 2021 at 10:30 at Historic Old St. John’s Church, 240 Bleeker St., Utica.

CLINTON - Mr. Juan Peña, age 79, passed into the arms of our Lord on Friday, October 15, 2021, after suffering from diminishing health conditions; his devoted wife was by his side. Born in Bonao, Dominican Republic, on November 22, 1941 to the... View Obituary & Service Information

The family of Mr. Juan Peña created this Life Tributes page to make it easy to share your memories.

Send flowers to the Peña family.