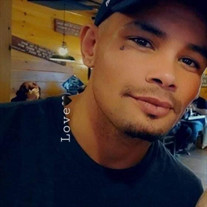 FRANKFORT/LAS VEGAS – Mr. Joshua Joseph Michael Jude Capirci, age 28, was embraced by the arms of the Lord on Sunday, August 29, 2021. Joshua was visiting the state of Arizona and was struck by a motor vehicle which caused his passing. Born in New Hartford on October 17, 1992, Joshua was the beloved son of Donna (Holbrook) Capirci. He was the middle child who grew up in a loving, generational home that included his momma, siblings, and grandma. He received his elementary and middle school education at the Sauquoit Valley Central School District and then attended Notre Dame High School where he excelled at basketball, baseball, and football. He was an intelligent young man, blessed with an impressive memory. He was recently accepted into the Anthropology program at Herkimer County Community College. Josh was well-suited for his profession as an Independent Contractor, a career that allowed him the opportunity to be creative and the vision to see a job to its successful conclusion. He was a non-judgmental man, able to peer into people’s souls and connect with them in a spiritual way. Joshie was insightful, knowledgeable, affectionate, and wise beyond his years. A positive person, he was a missionary’s child and a compassionate man blessed with morals and standards that his family taught him. Josh enjoyed helping his siblings and being with his family. His patience allowed him to connect with so many people who truly loved him. He reassured everyone that everything would be alright and to retain an optimistic outlook; his sense of humor was uplifting and would make others smile. He was a protector without soliciting anyone. He was graced with charm and friendship that ran deep. Joshua loved the East coast, especially Myrtle Beach in South Carolina, and he decided to travel to the West coast. He was inspired, but never intimidated, to meet new people. If he met someone who needed help, his benevolent personality pitched in and in no time, he became a new friend to the person he helped as well as their family. For Josh, it was the little things that made him happy: holidays, birthdays, and any celebrations. Chicken and Fettuccine Alfredo was a go-to order for Josh whenever dining out! A New York Giants fan, he had the opportunity to visit the Giants’ football training camp, and to his great joy, he met NFL running back Tiki Barber who gifted him with his gloves and allowed him to throw the football around. Above all else, Josh was best of friends with his mother and his sister Diamond. Josh and Diamond had a bond like no other, and they would often crack jokes and laugh for hours,… without a care in the world. If anyone messed with his sister, Josh was quick to her defense. He would often call his nephew, Jordan, and they would talk for hours and hours. Josh was a happy kid, and he gave as much love as he received. Some may think that he was well-schooled in Scripture, but it was amazing how he read the Bible words and faithfully converted them to a contemporary context with true conviction. Remarkably, in retrospect, some of the quoted Scripture he spoke of almost seemed as if he was preparing for the unforeseen event. We know he is at peace with the Lord, and that he has been reunited with those who went before him. But he awaits the day that he will be reunited once again with those he loves still on Earth. Joshua was a parishioner of St. Patrick-St. Anthony Roman Catholic Church in Chadwicks where he received all his Sacraments and was introduced to the Lord and his teaching of Faith, Hope, and Charity, virtues that Josh practiced as he shared a special spirituality with his Creator. It was in a promise to himself, to follow his path, affirm his values, express his passions, and treat people with respect for their differences and have compassion for their pain. He promised to do his best in every task he took on, …that was who Joshie was! Joshua is survived by his beloved mother, “Momma”; his sister and best friend, Diamond Capirci; his little buddy Jordan “Jordy”; his sisters and brothers, Kimmy Capirci, Tasheem Capirci (Jessica), Levon Capirci, and Jenifer Capirci; and many special nieces and nephews who Joshua loved with all his heart. He also leaves his loving godparents, Aunt Gale Light and Michael Kuhn. He shared a special bond with his Aunt Mary Kuhn; he loved his cousins and held them close to his heart; and his grandmother, Angela Capirci. His special Grandma Kate was surely running through the Gates of Heaven to hold her sweet Joshy, as well as Grandma Marie and Grandpa “Ciccio” Capirci, along with his special uncles, aunts, and cousins. Donna and her children never would have endured these days without the love of the Lord, the constant concern of family, blessed friends, and the community that gives without being asked to. They will always remember the love and compassion that was so needed. Relatives and friends are respectfully invited to attend Joshua’s Memorial Mass of Christian Burial and Celebration of Life which will be held at St. Patrick’s - St. Anthony’s Church in Chadwicks, NY on Saturday, October 2, 2021 at 10:30. The family will receive visitors at the conclusion of the service. Josh’s loved ones kindly ask for those in attendance at his service to please wear something Blue in solidarity for his love of the color Blue.

FRANKFORT/LAS VEGAS &#8211; Mr. Joshua Joseph Michael Jude Capirci, age 28, was embraced by the arms of the Lord on Sunday, August 29, 2021. Joshua was visiting the state of Arizona and was struck by a motor vehicle which caused his passing.... View Obituary & Service Information

The family of Joshua Joseph Michael Jude Capirci created this Life Tributes page to make it easy to share your memories.

Send flowers to the Capirci family.