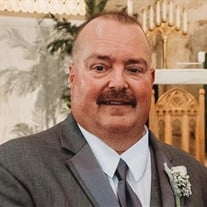 UTICA - Mr. Joseph R. Zumbo, age 58, passed away on Sunday, August 23, 2020 at MVHS at St. Elizabeth Medical Center with his loved ones in his heart. Born in New Hartford on September 30, 1961, Joseph was the son of Joseph F. Zumbo and the late Carol (Gibson) Zumbo. He was a graduate of New Hartford High School and continued his education taking college courses in business, finance, and accounting. A proud veteran of the United States Army, he served his country with honor, traveling around the world and bringing back stories to tell. At one time and for many years, he was wed to Cheryl L. Thompson Zumbo. Joe was employed by Remington Arms in the early 2000s, but had to retire due to health concerns. Previously, he owned and operated Mohawk Valley Landscaping. A very gentle soul, Joe tried not to complain about the circumstances of his life or his health, but rather chose to remind himself of how blessed he was. He was steadfast in his beliefs, unwavering in his faith, and deeply spiritual. Even with every obstacle stacked against him, he never got nervous or gave up; he would just give it all to the Lord. His biggest concern was for his family and their needs. As a typical Italian, he made sure that they always ate. Luckily, he loved to cook, so feeding people was his passion and his way of demonstrating his love. His most requested specialties were chicken riggies and greens. In his younger years, Joe was very athletic in sports, especially softball and many were amazed by his talent and skill in the game. As he got older, he enjoyed golf and deer hunting with his father, uncle, and brother. Joe took joy in spending time with his daughter and his granddog, Milo, at her house. He shared a special relationship with Milo (Da Mi), who was his canine companion and his “little prince”. Their favorite pastime was going for long walks around Herkimer together. Joseph is survived by his parents, Joseph F. Zumbo and his wife Carol; his daughter and son-in-law, Cassandra J. and Jesse Alling of Herkimer; son and daughter-in-law, Joseph G. and Erica Zumbo of NC; and his grandchildren, Skyler, Isabella, and Lincoln. He also leaves his sisters, Janet Zumbo, and Francesca Zumbo; brothers, Richard Zumbo, and Anthony Zumbo; aunts and uncles, Anthony and Clara Zumbo, and Vincent and Joan Zumbo; special nieces, nephews, great-nieces, great-nephews; cousins, especially acknowledging Gerard and Michael. He held close to his heart the memory of his sister and brother-in-law, Karen M. and Marc A. Cittadino who preceded him. He was predeceased by his paternal grandparents, Bruno and Rose (Gulla) Zumbo; uncle, Tony Barberio; aunt, Frances “Sistzi” and uncle, Norm Costello for whom Joe was a both caregiver for at the end of their lives and with whom he shared a beautiful relationship. The family appreciates the nurses of St. Elizabeth Medical Center for the care and compassion they provided to Joe during his stay. His love and strength will continue to live on in the hearts of his loved ones forever. The family will honor and commemorate Joseph’s life at a private time. Relatives and friends are respectfully invited to attend Joe’s funeral service and Celebration of Life which will commence on Monday morning at 11:00 at St. Mary of Mt. Carmel/Blessed Sacrament Parish where his Mass of Christian Burial will be offered. Face masks are required, and contact tracing will be implemented. Entombment will follow in Calvary Cemetery Mausoleum. Please take a moment to connect with Joe’s family through the “Memories” section of his obituary on our website. Our prayers go out to all as a sign of our continued support.

UTICA - Mr. Joseph R. Zumbo, age 58, passed away on Sunday, August 23, 2020 at MVHS at St. Elizabeth Medical Center with his loved ones in his heart. Born in New Hartford on September 30, 1961, Joseph was the son of Joseph F. Zumbo and the... View Obituary & Service Information

The family of Mr. Joseph R. Zumbo created this Life Tributes page to make it easy to share your memories.

Send flowers to the Zumbo family.