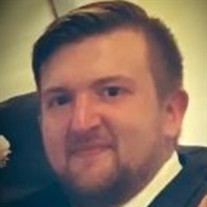 NEW HARTFORD - Mr. Joseph R. “Joey” Ventura, age 28, departed this life on Sunday, July 18, 2021. Although unexpected, he was having the time of his life at his best friend’s wedding. Born in New Hartford on December 6, 1992, Joseph was the son of Riccardo “Rick” and Wendy (Hammond) Ventura. He attended E.R. Hughes Elementary School and graduated from New Hartford High School/Class of 2011. He went on to attend MVCC where he received an Associate degree in Welding and was recognized as an advanced student in his field of study. His expertise in his profession eventually led to his appointment as an Adjunct professor in 2015. Joey fell in love with a wonderful young lady who was an amazing partner. When he met Lindsay Grenier, it was a perfect match from the beginning ~ they had similar interests and complemented one another, and she embraced him and will always be part of his family. She will forever hold his memory in her heart. Auto Zone was Joey’s first job, and he enjoyed this full-time position where management recognized and appreciated his work ethic. He subsequently became the 3rd generation of Venturas to work at Special Metals where he began in the Lab, diligently working the midnight shift with a steadfastness that was acknowledged by all, efforts that yielded him a promotion to Mass Spectro Technician. He was an incredible worker among his peers and the company saw his potential and his promotion to this position was a perfect fit. He “owned” the responsibilities that were pre-requisites for success in his higher level job. He was now a company man and performed with great potential in mind for his future with Special Metals. As their son, his parents saw in Joey a great child with an attentive personality. Soccer was his favorite sport in his youth, and he was coached by his dad who cheered him on. He was an amazing kid, very social and very creative. He had joy in his soul, laughter in his heart, and a smile on his face. His magnetic personality made many memorable moments for all to treasure. So many good values of his parents were instilled in him, and they were so proud of him. He was a loyal friend to many, but he also knew that his parents and his sister were his best friends. Though he traveled some difficult paths and by-ways, he faced his challenges and worked through the trying times. Everything was family for Joey. He loved life, and friendships were so important to him. He never complained, and every day was precious to him. He made the best of each phase of his life. He was a protective big brother and he loved his little sister so much. They spent time together and had great love and respect for one another from childhood to adulthood. He left this world at the peak of his happiness, with people he loved around him. It is so difficult to accept, but his family will hold him close to their hearts until someday they see him again. Joey had an affinity for the Adirondacks; he was amazed by the peaceful beauty of the mountains, trails, and bodies of water. Fishing was a favorite pastime, and he was currently planning with Lindsay to pursue their recent dream of purchasing a camp on Kayuta Lake. Joey was friends with the Giotto family who owned Brightside Camp in Racquette Lake, and when he visited Brightside, he always liked to stay in the haunted room! Playing soccer was still his passion and he enjoyed playing forward, competing with his dad and sister, as well as pick-up games with friends at work. He also loved to cook and enjoyed preparing different recipes for Lindsay. He was great at prepping the food, and Lindsay was the clean up crew by his side. Joey believed in a higher power which kept him balanced, and he expressed his beliefs in the beautiful tattoos inscribed upon him, … the images that he held near and dear to his heart. Joey is survived by his father, Riccardo “Rick” and his wife Audrey Ventura; his mother, Wendy Hammond and Junior Laracuente; his sister, Jamie Ventura-Carter and her husband Shane and their children who Joey adored and loved so dearly, Kyah, and Everly; paternal grandfather, Ercole “Eric” Ventura; and the ‘Love of his Life’, Lindsay Grenier. He will also be remembered by his aunts and uncles, great-aunts and great-uncles, and cousins. Joey was blessed with multiple groups of friends who were the best influence and a constant presence in his life. He had old friends forever, and new kindred pals he treasured. He was greeted by his predeceased paternal grandmother, Patricia Anne (Spatuzzi) Ventura; and maternal grandparents, Joseph T. and Gloria M. Hammond. The family extends their heartfelt appreciation to Joe Paciello, a friend who was a MedVac, and COCVAC for their immediate response; and the MVHS at St. Elizabeth Medical Center Emergency Room doctors and their entire staff for their valiant efforts. Visitation will be held Friday afternoon from 3-6 at the Eannace Funeral Home, Inc., 932 South St., corner of Hammond Ave. A Prayer Service will commence on Friday evening at 6:00 at the funeral home upon conclusion of visitation. In lieu of flowers, memorial donations in Joey’s name may be directed to Connor’s Way Walk and Run in honor of CONNOR ARTHUR LYNSKEY online at https://www.connorsway.com/donate/ or by mail to Connor Arthur Lynskey Memorial Scholarship Fund, c/o Donald Lynskey, 5 Ironwood Road, New Hartford, NY 13413. Envelopes will also be available at the funeral home.

The family of Joseph R. "Joey" Ventura created this Life Tributes page to make it easy to share your memories.

Send flowers to the Ventura family.