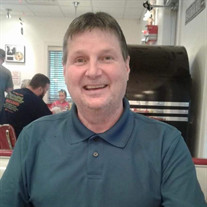 UTICA - Mr. Joseph T. “Joe” Sayles, age 63, went home to the Lord on Wednesday, November 25, 2020 in the comfort and dignity of his home. Born in Utica on October 15, 1957, Joseph was the son of Thomas W. “Tom” and the late Barbara A. (Carbone) Sayles. He was a graduate of T.R. Proctor High School/Class of 1975 and continued his education at SUNY Broome Community College in Binghamton where he received an Associate Degree in Criminal Justice. On October 18, 1986 he married the former Sherry L. Dinneen with whom he shared 34 years of laughter and unconditional love! He affectionately called her “Sher Bear”. They often took rides to their favorite places, listening to music during their journeys, and just enjoying each other’s company. Joe was currently working at ConMed Corporation where he made medical supplies as an engineer. As a dad, he was everything you could ask for. He was patient with his children when teaching them about life, and always reminded them to be true to themselves. He treated every accomplishment like it was the most exciting news he heard, often jumping for joy. He always found the positive in every situation, even at sporting events when he displayed good sportsmanship toward the winning team for playing fair and square, even if it was not his children’s team! He was always in attendance at their volleyball and soccer games. As a grandpa, Joe watched his grandchildren play football, baseball, basketball, and perform taekwondo and dance. He felt joy in knowing the children were having fun and learning the sport. As a practicing Catholic, Joe was a parishioner of St. Anthony & St. Agnes Church. He attended the annual parish bazaar and the celebration that honored St. Cosmas and St. Damian. He put his trust in the Lord and shared it very openly with his children. He prayed and taught them to believe in a Higher Being and that things would be okay as long as they had each other and their faith. As an outdoorsman, he enjoyed playing golf with his family and at his work affiliation tournaments. His love for the game inspired him to follow the rules, a guideline that was important to him. He also had the skill and patience to pursue hunting deer and small game during the seasons, at some of his favorite hunting spots. He was also an avid fisherman, especially at Alexandria Bay which was one of his favorite locations to cast a line. Joe loved to eat — just about anything, including pasta, grilled hamburgers, venison, and popcorn with extra butter. Every pizza establishment in town knew who he was for his love of their food. As a handy man around the house, Joe continuously embarked on new home improvement projects. He was a lighthearted jokester, who could brighten any room with a witty line. He loved music, often singing even when he didn’t know the words or creating his own serenades for each of his family members. And only he could get away with that, …because he was a “smooth operator”. But above all, as a dependable dad, Joe was always present for his kids in a time of need, with unconditional love. He was most proud of his children, who they became, and what they did with their lives, and he was equally grateful for the love and companionship of his wife. His dad was proud of how well-rounded he was and how he accomplished so many things so well! Joseph is survived by his wife, Sherry; his children and their loves, Kristen Sayles, James and Carrie Sayles, and Melissa Sayles; grandchildren, Shianna, Danell, and Mia; and Vinnie; his father, Thomas; brother, Michael Sayles; uncles and aunts, Frank “Sonny” Carbone, James “Jim” Carbone, Linda Sypek, Frannie Carbone, Alice Spina, Sally and Terry Fike, Kathy and Albert Evans, and Darlene Sayles; great-aunt, Helen Carbone; nieces, nephews, great-nieces, great-nephews, cousins; in-laws, Cheryl Dinneen, Michelle and Daniel Lesniak, and John Dinneen; and a multitude of East Utica buddies, …and what more could a man want! He was predeceased by his uncles, Eugene J. “Gene” Carbone, and Nick A. Spina; aunts, Marcia Marie (Duda) Carbone, and Judith Carbone; great-uncle and great-aunt, George D. and Connie Sykes; and great-aunt, Mary Ellen Amarose. The family will honor and commemorate Joe’s life at a private time. During this time of social distancing that we are all experiencing, please take a moment to connect with Joe’s family through the “Memories” section of his obituary. Our prayers go out to all as a sign of our continued support. Sherry by The Four Seasons https://youtu.be/7sJCYeG6be8

The family of Mr. Joseph T. "Joe" Sayles created this Life Tributes page to make it easy to share your memories.

Send flowers to the Sayles family.