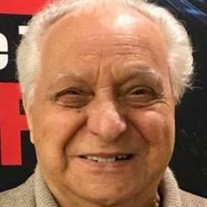 UTICA/SPILINGA, ITALY - Mr. Joseph Putruele, age 87, passed away on Friday, August 13, 2021 with his family by his side. Born in the town of Spilinga in Calabria, Italy, a region of stunning beaches, rugged inland mountains, and unparalleled scenery, Joseph was the son of the late Girolamo and Maria (Cuppari) Putruele. After his secondary schooling, he furthered his education in Classic Studies at Liceo, a prep school for the academic study of the Humanities and Culture. He went on to graduate from college with a Teacher’s Degree from the Liceo Classico of Catanzaro. In 1962, Joe immigrated to the United States where he settled in Utica. At one time, he was married to the former Catherine Pietropaolo and from that union came the blessing of 3 children, Mary Rose, Jerry, and Catherine. He entered into a second union when he married the former JoAnn Gallo who passed away on December 29, 2004. At one time, Joe worked as a Social Worker in Italy. He was also employed as a Wholesale Salesman for Service Wine and Liquor for 35 years where he became an expert in fine wines and liquors. Joe utilized his classical education in cultural traditions when he worked as the radio announcer as The Voice of Italy for well over 50 years; currently he was on the air waves with Radio Station WUTQ 100.7 FM as The Voice of the New Italy which broadcasts on Sunday mornings in his native language as well as English, a job that he loved. He was a staple for Italian local families on Sundays, promoting Italian music, keeping traditions alive, and allowing families to re-live childhood memories. Joe was a member of the Kiwanis Club of Whitestown for over 15 years; the former Sons of Italy Lodge #2054, and the Coliseum Soccer Club. He enjoyed hosting weekly dinner parties at his house with his good friends, and his meals were always accompanied by specific wines to complement his home cooked meals. Joseph is survived by his daughters and sons-in-law, Mary Rose and Charles “Chuck” Mitchell, and Cathy and Josh Uttamsingh; his son and daughter-in-law, Jerry and Bianca Putruele; grandchildren, Avery Mitchell, Brendan Mitchell, Carissa Putruele, Alec Putruele, Olivia Uttamsingh, and Alexa Uttamsingh; his sisters and brother-in-law, Rosa and Antonio Zungri, and Annunziata Putruele, in Italy; and his brother and sister-in-law, Frank and Carol Putruele. He also leaves many nieces, nephews, great-nieces, great-nephews, cousins; in-laws, Giuseppe Caputo, Rose Vita, and Frank Vita; and a host of special friends, and fans. He was predeceased by his sister, Domenica Caputo; and brother-in-law, Francesco Cuppari. Relatives and friends are invited to attend Joe’s funeral service and Celebration of Life which will commence on Saturday morning, August 21st at 11:00 at St. Anthony & St. Agnes Church where his Mass of Christian Burial will be offered. The family will receive visitors at the conclusion of Mass. Entombment will take place in Christ Our Savior Mausoleum at Calvary Cemetery at the convenience of the family. Arrangements are under the direction of Nancy L. Eannace and Joe’s nephew, Dominick S. Vita, of the Eannace Funeral Home, Inc.

UTICA/SPILINGA, ITALY - Mr. Joseph Putruele, age 87, passed away on Friday, August 13, 2021 with his family by his side. Born in the town of Spilinga in Calabria, Italy, a region of stunning beaches, rugged inland mountains, and unparalleled... View Obituary & Service Information

The family of Mr. Joseph Putruele created this Life Tributes page to make it easy to share your memories.

Send flowers to the Putruele family.