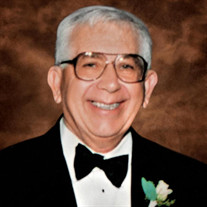 UTICA - Mr. Joseph Frank Gaeta, age 91, passed peacefully on Monday, February 8, 2021 at the Masonic Care Community with the love and support of his family. Born in Utica on September 28, 1929, Joseph was the son of the late Joseph and Agnes (Chambrone) Gaeta. His mother passed when he was 11 years old and his second mom, Mary Gaeta raised him as her own. He began his elementary schooling in the Utica City School District in 1936, and completed his secondary education as a graduate of T.R. Proctor High School, Class of 1949. He continued his education at Clarkson University from 1949-1950 and then at Utica College of Syracuse University where he earned his Bachelor of Arts degree in Physics in 1959. A proud veteran, Joe served his country with honor from 1951-1955 as a member of the United States Air Force stationed stateside. On April 8, 1961 he married Evelyn Arrigo with whom he shared 46 years in an incredible union of love and devotion. From this beautiful marriage, they had two wonderful children, Gail and Joseph. Evelyn passed away on September 11, 2007. But now, they are one, for eternity. Joe entered the workforce at the Rome Air Development Center (RADC) at Griffiss Air Force Base where he developed Radar systems used in the protection of our great nation. Joe’s passion for technology was evident in his projects that were years in the making. His travels were vast and his position was integral in the defense and protection of our freedom. In 1985, after rendering 25 years of service to the RADC, he retired. A man of devout faith, Joe lived a Christ-centered life, channeling the word of God each day. Joe attended weekly Mass at St. Anthony & St. Agnes Church and participated in the annual parish festival as well as the yearly feast honoring Sts. Cosmas and Damian. For friends and family, the Gaeta household was the gathering place for any occasion whether for after church coffee or holiday parties, especially Christmas Eve and New Year’s Eve. He and Evelyn always welcomed loved ones to their home that was filled with laughter, tradition, hospitality, and most notably, food. For a hobby, Joe took up photography and cinematography and featured his latest work on Saturday nights. When he wasn’t behind the camera, Joe exercised his other interests. He remodeled their home, tinkered with cars, planted an annual vegetable garden, enjoyed boating at Delta Lake, fishing on the Black River, played poker on Friday nights with his brothers-in-law and nephews, dined out and played cards with friends during “couples time”, and golfed during retirement, a sport that he loved. In addition to golf, Joe loved watching Yankee baseball but enjoyed watching his grandson Joe play even more. As snowbirds, Joe and Evelyn traveled to Palm Bay, Florida every winter where they loved the sunshine. They grew more adventurous in their new oasis, blessed with old and new friends, alike. As a father and patriarch, he provided insightful guidance, loving fun, and plenty of jellybeans to those around him. He was a kind man, non-judgmental and supportive. Spending time with his grandchildren and sharing his love with them was second nature. He shared a lifetime of wisdom and stories and never failed to make them smile with songs or jokes! His grandchildren adored him. Joe was a former member of the Knights of St. John’s Commandery #385. As a true patriot, he always saluted the American flag. Looking back, we can celebrate Joe’s life, when it began as a boy who grew up during the Great Depression, resilient and dedicated as he became an honorable man, rooted in loving God, his family, and his country. Joe is survived by his daughter, Gail A. Diesfeld; his son and daughter-in-law, Joseph and Susan Gaeta; grandchildren, Erica Diesfeld, Evan Gaeta Diesfeld, Elise Diesfeld and their father, Paul; Ariana Gaeta and her loving spouse Angela, and Joseph Salem Gaeta; his sister and brother-in-law, Regina and David Lewis. He also leaves many nieces, nephews, great-nieces, great-nephews, cousins; brother-in-law, Vito “Parky” LoParco; and lifetime friends, Joseph and Margaret Montanaro, as well as many other friends who were loyal and close to his heart. He was predeceased by his sisters and brothers-in-law, Carmella and Louis “Red” Chirillo, Agnes and Vaughn “Bud” Combs, and Rosaline LoParco; brother, Frank Gaeta; and in-laws, Frank and Theresa Arrigo, Marino and Antoinette Arrigo, and James and Angie Arrigo. Every conversation with Joe concluded with a simple sentiment, “Ti amo con tutto il cuore E mi manche tu”. The family is grateful to Dr. Kevin McCormick and the Masonic Care Community of CNY, especially the staff of the Brooklyn Household, for the love and care they provided to Joe these past few years; as well as Jay and staff from the Activities Department who provided weekly FaceTime meetings for Joe and his family to connect during these difficult times. The family will honor and commemorate Joseph’s life at a private time. Relatives and friends are respectfully invited to attend Joseph’s funeral service and Celebration of Life which will commence on Friday, February 12, 2021 at 12:00 noon at St. Anthony & St. Agnes Church where his Mass of Christian Burial will be offered with Military Honors conferred by the United States Air Force. Face masks are required and social distancing and contact tracing will be implemented. Those wishing to express an act of kindness in Joe’s memory may make a contribution to either St. Anthony & St. Agnes Church, by mail to 422 Tilden Ave., Utica, NY 13501 or the Alzheimer's Association, Central New York Chapter online at https://www.alz.org/centralnewyork or by mail to 441 W. Kirkpatrick St., Syracuse, NY 13204; envelopes will also be available at the service. Interment will follow graveside in St. Agnes Cemetery where he will be laid to rest beside his wife. During this time of social distancing that we are all experiencing, please take a moment to connect with Joe’s family through the “Memories” section of his obituary. Our prayers go out to all as a sign of our continued support.

UTICA - Mr. Joseph Frank Gaeta, age 91, passed peacefully on Monday, February 8, 2021 at the Masonic Care Community with the love and support of his family. Born in Utica on September 28, 1929, Joseph was the son of the late Joseph and Agnes... View Obituary & Service Information

The family of Mr. Joseph F. Gaeta created this Life Tributes page to make it easy to share your memories.

Send flowers to the Gaeta family.