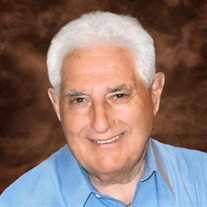 UTICA - Mr. Joseph F. Cucharale, Sr., age 85, was reunited with his wife, “Mer”, when he passed away on Friday, February 28, 2020 with those he loved most in his heart. Born in Utica on April 19, 1934, Joseph was the son of the late Joseph A. and Florence (Manning) Cucharale. Raised and educated locally, he attended Utica Free Academy. Joe enlisted in the United States Marine Corps during the Korean Conflict attaining the rank of Sergeant. A member of the Military Police, he honorably served for the Commanding General and received many commendations for his actions and dedication. He upheld his military motto “Semper Fi” to the end of his life. On April 27, 1957 he married the former MaryEllen “Mer” Enea. Their need for one another, and raising their children with love were the greatest blessings during their 61 years together. His beloved “Mer” passed on September 26, 2018. A salesman at heart, one of Joe’s first positions was at the McCormick Spice Company, and later at the Cott Beverage Company. His next venture was establishing Better Homes & Businesses Improvements, a successful enterprise founded on his talents as an accomplished finish man and builder. He remodeled and constructed many memorable family homes and businesses in town. He was also known for his professional snow plowing. He semi-retired to his home, gardening and meticulously maintaining his yard and his landscape; they were picturesque, colorful, bountiful, and admired. Joe had a wealth of wisdom and knowledge, and many would seek out his advice. He also kept up with technology, an accomplishment for a man of his years. He was a proud, patriotic American, and he took a stance on topics that were important. His Italian heritage included his old world cooking, and his venison stew was second to none. He knew the proper art for picking wild mushrooms in the woods, broccoli rabe, and delicious dandelions. Joe had a magic for making something awesome, from scratch, and he did it on so many levels. He and a group of close family and friends established the Buck Horns Fish & Game Club of Utica, NY. The Southern Tier was their favorite spot for fishing and hunting during three seasons of the year. They were passionate about these sports and the serenity of Raquette Lake, and their peaceful place on the St. Lawrence River, and West Canada Creek. The beauty of the land meant so much to Joe and “Mer” and it was a pastime they enjoyed all year. An avid outdoorsman on many levels, Joe had a sport for every season. He was also stern about safety, holding to the principle “If you’re going to do something, do it right”. All of his words of wisdom were laced with laughter and a sense of humor, and he delivered a joke like no other. Playing cards, particularly gin rummy, was another pastime he enjoyed with good friends at notable locations. He enjoyed listening to many genres of music whether at work or at leisure. Joe was a diehard Syracuse University basketball and football enthusiast. He appreciated that his children honored the values he instilled in them and was proud of each of them. As a couple, he and “Mer” raised three great kids. Joe was a man of God and was guided by his faith whenever he made heartfelt decisions during his life. Joseph is survived by his children and their spouses, Donna M. Cucharale, Mark J. and Linda Cucharale, and Joseph F., Jr./Sgt. Retired UPD and Margaret Ann Cucharale; grandchildren, Bryan, and Brandon Allen; Jace Cucharale; and Kali, and Karissa Cucharale; and his devoted and loving brother, Richard M./Ret. UPD and his wife Jacqueline Cucharale. He also leaves his uncles and aunts, Rocco and Lena Cucharale, and Carmela Grande-Etergineoso; nieces, nephews, great-nieces, great-nephews, cousins, in-laws, Agatha Enea, Philip and Gloria Enea, and Ben and Roe Enea; longtime and dear friends, Danny and Carm Tedesco, Rose Bucciero, and Chris Gelfuso; and his canine companions, most recently Rusty. He was predeceased by his uncles and aunts, Henry L. Cuchiarale, Nicholas Cucharale, Philomena MacCrea, Mary Pepperine, and Rose Levito. The family extends their gratitude to the Infusion staff at MVHS @ Faxton for their compassionate care; and the Masonic Care Community Rehabilitation Department for their outstanding treatments that allowed Joe to thrive. The Cucharale family are also so grateful to the many who tended to their dad with dignity and compassion. Relatives and friends are respectfully invited to attend a Memorial Gathering in Joseph’s honor which will take place on Thursday afternoon from 4:30-6:00 at the Eannace Funeral Home, Inc., 932 South St., corner of Hammond Ave. In lieu of floral offerings, donations in Joseph’s memory may be made to Feed Our Vets online at https://secure.donationpay.org/feedourvets; envelopes will be available at the funeral home. His funeral service and Celebration of Life will commence at 6:00 immediately upon the conclusion of the Memorial Gathering with Military Honors Conferred. “Semper Fi”

The family of Mr. Joseph F. Cucharale Sr. created this Life Tributes page to make it easy to share your memories.

Send flowers to the Cucharale family.