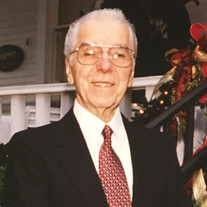 UTICA - Mr. Joseph A. Convertino, Sr., “Joe the Barber”, age 94, passed away on Thursday July 30, 2020 during his stay with the caring staff of the Masonic Care Community. Born in Utica on March 2, 1926, Joseph was the son of the late John and Jennie (Diaz) Convertino. He was raised and educated in Utica and proudly served his country in the U.S. Army where he was deployed to Okinawa during World War II, and received the Asiatic Pacific Campaign Medal. In 1953 Joseph attended Roberts Barber School in Buffalo N.Y. and began his lifelong career. In 1949 Joseph was united in marriage to the former Victoria Panaro and together they raised their family with good morals and ethics. Joe lovingly took care of his wife Vicki through her 7-year struggle with cancer until her passing in 1994. Joseph leaves behind three children and their loves: a son Joseph A. Convertino Jr. and his wife Gabriela, a daughter Roseann and husband Lynn Nachtigal, a son John Convertino and fiancee Julie Guido, his beloved granddaughter Tanya A. Chandler and husband David, dedicated cousins Mary & Jim Galpin, and his lifelong friend Peter Zizzi. Joe dedicated his life not only to his family but also to his 64- year career as a barber on James Street, proudly serving numerous generations while sharing his acquired knowledge of life from his journey. Joseph's strong work ethic assured that his customers received a haircut no matter the circumstance, including going to their homes, nursing homes, and hospitals to ensure they looked good. As a child of the depression, Joe’s core values were focused on creating a future for his family that was rooted in the Catholic faith, unconditional love, loyalty, and strong financial learnings. He passed all of these teachings on to his children and granddaughter Tanya to whom he played a strong part in raising. There was no doubt that through the years, his children could always depend on him for whatever was needed and we all thank him for being a person who bestowed great guidance! When Joseph suffered a debilitating stroke 5 years ago, he entered Masonic Care for rehabilitation and was unable to fully recover. Since that time, he has been cared for by a dedicated staff that always provided Joe with the highest level of care. The family would like to thank the entire Masonic staff that so lovingly cared for our father throughout the years especially his day-to-day nurse Lori Lawton who always understood his needs and those of our family. Joseph was a communicant of St. Anthony & St. Agnes Church and a former parishioner of St. Mary Mt. Carmel/Blessed Sacrament Parish, and those closest to Joe know that no matter the parish, he was dedicated to religiously attending Mass. In death, Joseph will join his beloved wife Victoria, his parents, his sister Frances, brother Benny, and numerous friends and clients that he missed so dearly. Relatives and friends are respectfully invited to attend Joseph’s funeral service and Celebration of Life which will commence on Tuesday morning at 11:30 at St. Anthony and St. Agnes Church where his Mass of Christian Burial will be offered. The family so appreciates the fine organization of the Masonic Care Community of NY that they request that memorial contributions be considered to them online at https://www.masonichomeny.org/ways-to-support/donations; they are so grateful for the respect and admiration they were given over the years so unconditionally. Envelopes will also be available at the Mass. Face masks are required, contact tracing will be implemented, and the funeral home staff will kindly direct everyone through the entrances and exits. Entombment will take place in Calvary Cemetery Mausoleum at the convenience of the family. Please take a moment to connect with Joe’s family through the “Memories” section of his obituary at www.EannaceFuneralHome.com. Our prayers go out to all as a sign of our continued support. “It is very important for a young woman to have a strong, loving and wise man in and throughout their life. Thankfully, I was blessed with my grandfather Joseph Convertino. He shaped me and I can confidently say that I am an infinitely better being, having been under his wing. His gifts in life have proven to be invaluable and may death not part us. I love you!” - Tanya Ann Chandler, Granddaughter

The family of Mr. Joseph A. Convertino, Sr. created this Life Tributes page to make it easy to share your memories.

Send flowers to the Convertino family.