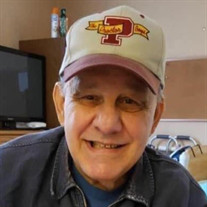 UTICA - Mr. Joseph A. Chambrone, Sr., age 81, was reunited with his wife when he passed away on Sunday, August 2, 2020 with those he loved the most in his heart. Born in Utica on September 18, 1938, Joseph was the son of the late Joseph V. and Caroline (Lucia) Chambrone. He was a graduate of T.R. Proctor High School/Class of 1956. On April 4, 1959 he married his high school sweetheart, Frances “Fran” Cardamone who he loved so much. They were blessed with a marriage of 58 years prior to Fran’s passing on February 10, 2018. Joseph began his working life at RCA Telecommunications at Griffiss Air Force Base. His main employment followed at Abelove's Linen Supply Co. where he worked for 25 years as a route salesman. Always accommodating his company and customers, Joe served as a Teamster’s Union Representative as well. An industrious provider, he concurrently held a job at Vernon Downs as a bartender. After his retirement, Joe re-entered the workforce as an employee of LB Security stationed at the Bank of NY and Utica College. Spending time and gathering with his family and in-laws was important to Joe. He was a fair father who wanted the best for his children, and most importantly, wanted them to respect their mother. Over the decades, they enjoyed summers at Verona Beach, White Lake, and the Adirondacks in Old Forge. In retrospect, Joe often reminisced of the times he would go fishing along with his Dad, special occasions for both of them. He loved the simple things in life, and it didn’t take much to please him; a gin and tonic, Friday Fish Fries, and Saturday morning breakfast with his wife where they were embraced by the hospitality of the Marr-Logg Restaurant staff who always made them feel so welcome. Football rounded out the weekend on Sundays. A sportsman himself, he was involved with his sons’ Little League baseball as a coach. He was a devoted fan of the NY Yankees and the NY Giants all the days of his life,… and don’t get in the way while he was watching a game! Joe and Fran lived a lovely life with family, good friends and great times, always celebrating special occasions such as New Year’s Eve, Super Bowl Sunday, and just the pleasure of being with the people they loved. Joe knew the companionship of his canine Brandie who walked with him through life - “he loved that dog!” He was a parishioner of St. Mary of Mt. Carmel/Blessed Sacrament Parish. Joe was proud and grateful that he raised three great children and had the gift of grandchildren who graced his life and gave him great memories. He adored them and was “head over heels” for them! Joseph is survived by his children and their loves, Rosemary and Ronald “Ron” Brown, Joseph A. Chambrone, Jr. and Paula Schnitt, Michael and Jennifer Chambrone; the memory of 2 infant children who preceded him, Joseph, and Patricia Chambrone; his grandchildren, Edward Ajaeb, Amanda Ajaeb and Corin Feldman; and Jionni Chambrone. He also leaves his nieces, nephews, great-nieces, great-nephews, cousins; in-laws, Cora Chambrone, Barbara Santino, and Judith Calhoun; and lifelong friends, Carl Hoffman, Michael Taurisano, Joe Micha, and Ernie Lange with whom he shared life and precious times. To Joe, …they were loyal, like brothers. He was predeceased by his sisters and brother-in-law, Eleanor Tartaglia Velardi, and Mary Ann and Anthony Lewis; brother, Louis Chambrone; and beloved in-laws, Lillian and Costantino “Costy” Prestigiacomo, Marian and Joseph Favata, Peter and JoAnn Cardamone, Daniel Santino, and Robert Calhoun, Sr. The family extends their appreciation to Joe’s personal physician, Dr. Julie Gorczynski for her compassionate care; home health aide, Karen Credle for her devoted vigilance; Utica Fire Department, especially Engine 3 for the many kindnesses they extended while Joe was still at home. and the entire staff of the Presbyterian Home of CNY for all the wonderful attention rendered to Joe during his stay. The family will honor and commemorate Joseph’s life at a private time. Relatives and friends are respectfully invited to attend Joseph’s funeral service and Celebration of Life which will commence on Thursday at 12:00 noon at St. Mary of Mt. Carmel/Blessed Sacrament Parish where his Mass of Christian Burial will be offered. In lieu of flowers, contributions in Joe’s memory may be considered to the Stevens-Swan Humane Society, 5664 Horatio St., Utica, NY 13502 or online at https://stevens-swan.org. Interment will follow graveside in Calvary Cemetery. Please take a moment to connect with Joseph’s family through the “Memories” section of his obituary. Our prayers continue to go out to all as a sign of our continued support.

UTICA - Mr. Joseph A. Chambrone, Sr., age 81, was reunited with his wife when he passed away on Sunday, August 2, 2020 with those he loved the most in his heart. Born in Utica on September 18, 1938, Joseph was the son of the late Joseph V.... View Obituary & Service Information

The family of Mr. Joseph A. Chambrone Sr. created this Life Tributes page to make it easy to share your memories.

Send flowers to the Chambrone family.