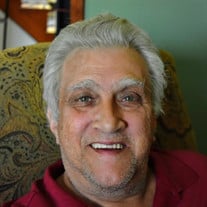 WHITESBORO - Joseph Angelo Carbone, first-born son of James and Rita Carbone, passed away on July 1st 2020 after a traumatic illness of 7 months, surrounded by his grieving family. Joe and Mary would have celebrated 35 years of marriage this August 3rd. There was always a deep love between them, but Mary realized how valuable he was to their union throughout his illness. He was the extraordinary caretaker to their home, their marriage, and their love. Mary will grieve forever. For Joe, the sun rose and set with his daughter, Beth-Anne, for whom he was awaiting her graduation from medical school next May and her upcoming marriage to her fiancé, Michael Sullivan. There was never a greater love for a daughter. Joe and Mike bonded from the moment they met, and he often referred to him as “the son he never had.” This was not a cliché for Joe—for him, it was the truth. Also grieving Joe are his brothers, James and his fiancée Cheryl Brown, Robert and his wife Christine, and his brother-in-law, Joseph Papandrea, who were at his side with him in many medical facilities and in his final days at home. He leaves many nieces and nephews including Dr. Lora Papandrea and Tom Norton, Rocco and Scarlett Pepe, Vincent Pepe, Vincent and Heather Papandrea, James and Amy Carbone, Robert and Catherine Carbone, Jennifer Carbone, Nicole and Jack Mayo, Nicholas Carbone and fiancée Brittany Ward, and Kyle Carbone. He also leaves many great-nieces and nephews, cousins, and friends. And of course, he leaves behind his two dogs, Princeton and Spock. He was predeceased by sister-in-law Marilyn Papandrea and sister-in-law and brother-in-law Silvia and Joseph Pepe. Joe’s life was not measured by the schools he attended or jobs he held. Instead, he is defined by his love of life, his sense of humor, his silliness, his extreme generosity, his integrity, his willingness to help others, and his love of family. He was not your average Joe; he was an unforgettable, extraordinary, remarkable man. Visitation will be held Sunday from 2:00-5:00 at the Eannace Funeral Home, Inc., 932 South St., corner of Hammond Ave. Due to current restrictions, we will be operating at a reduced occupancy. We ask for your patience as we try to accommodate those coming to support the Carbone family. Please follow our staff’s guidance when you arrive. Face coverings are mandatory at both visitation and funeral service, and contact tracing will be implemented. Joseph’s funeral service and Celebration of Life will commence on Monday morning at 11:30 at The Catholic Community of Whitesboro at St. Paul’s Church where his Mass of Christian Burial will be offered. Please take a moment to connect with Joe’s family through the “Memories” section of his obituary on our website. Our prayers continue to go out to all as a sign of our continued support. Don’t forget, Joe, “I love you more!” This tribute was affectionately written by Joe’s wife, Mary.

WHITESBORO - Joseph Angelo Carbone, first-born son of James and Rita Carbone, passed away on July 1st 2020 after a traumatic illness of 7 months, surrounded by his grieving family. Joe and Mary would have celebrated 35 years of marriage this... View Obituary & Service Information

The family of Mr. Joseph A. "Joe" Carbone created this Life Tributes page to make it easy to share your memories.

Send flowers to the Carbone family.