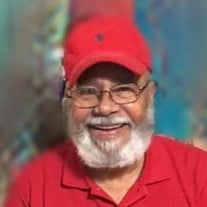 UTICA - Mr. Jorge L. “Campo” Campos Chamorro, age 67, passed away unexpectedly after a lengthy heart condition on Sunday, March 28, 2021 in the comfort and dignity of his home. Born in Ponce, Puerto Rico on December 12, 1953, Jorge was the son of the late Carlos M. and Julia (Chamorro) Campos. In 1985 he came to Utica with his family and worked as a self-employed mechanic for many years. He also worked at the New York State Canal System in the Maintenance Department. He took pride in his work and was a great provider. He was prideful of his children and grandchildren, and was a great example in trying to show them exactly what was important in life. His guidance and values were humble, heartfelt gifts to his generations that followed. Jorge was the first one to arrive at family gatherings and enjoyed the food of his Hispanic heritage. He was always dependable and with his outgoing nature, he was ready to partake in any family project. He rode many miles on his bicycle for exercise and physical fitness, as well as mind over matter in accomplishing his goals. He also had an affinity for dogs and he spent time training and walking his pit bull “Cruz”. He and Cruz were best buds and certainly proved to be man’s best friend. The Lord lived in Jorge’s heart and he held a personal relationship with Him. Jorge is survived by his children and their loves, Jessica Campos Colon, Jahaira Campos Colon, Jorge L. Campos, Jonathan and Tatiana Campos, and Jorge L. Campos Jr.; his grandchildren, Aniya, Kiara, Jelfrain, Miguelangel, and Jacob; Yaira, Luis, and Kassandra; Joshua Joelys, Joreilis, Jorge L., Kataleya, and Jorge L. Jr.; Jonathan Jr., Mia, Aitxa, and Yisrael; and Anijla. Jorge was one of 4 children, 3 of whom passed before him. In keeping with the family’s wishes, they will honor and commemorate Jorge’s life at a private time. During this time of social distancing that we are all experiencing, please take a moment to connect with Jorge’s family through the “Memories” section of his obituary. Our prayers go out to all as a sign of our continued support.

The family of Mr. Jorge L. "Campo" Campos Chamorro created this Life Tributes page to make it easy to share your memories.