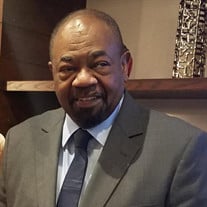 UTICA - Mr. Johnny B. “John” Bembry, Jr., age 73, went to heaven on Thursday, November 19, 2020 when he passed away unexpectedly at MVHS at St. Elizabeth Medical Center. Born in Hawkinsville, Georgia on August 24, 1947, Johnny was the son of the late Johnny B., Sr. and Mattie (Worley) Bembry. He concluded his secondary education when he attended T.R. Proctor High School. On October 23, 1971 he married his sweetheart Berthell “Bert” Williams. He pursued her gently since their youth, and during their 49 years together, they laughed and loved and enjoyed each other. Theirs was a blessed marriage, …Amen. John was employed at the Central Association for the Blind & Visually Impaired as a Warehouse Supervisor at the Bleecker Street location. His positive attitude and productive work ethic were exemplary and he took on the responsibilities of his position with pride and precision. At CABVI, some of his fellow workers affectionately knew him as “Dad”, and today, his co-workers are heavy-hearted that he has passed. John had the virtue of patience and his wisdom was beyond his years. He had faith in his heart and kindness in his deeds, …and the Lord provided. He was the best Dad ever, and he strived to teach his children to be independent. He was a jack-of-all-trades and educated himself to be able to accomplish any repairs or improvements to his house. Family vacations were so memorable, especially the trips to the theme parks where he braved the scariest rides with his kids and grandkids. He was always “Mr. Mom” because of his wife’s work schedule, and he did everything so well and with love. He was even credited for overseeing a party for one of his daughter’s Cabbage Patch dolls, because we all know that they too had a birth certificate. He was a self-taught musician playing the keyboard and guitar in his “man cave”. He especially appreciated the music of James Brown and Michael Jackson, and sometimes his wife seemed to think he was playing the same song over and over. Johnny was a rock for everyone, and he touched their lives through the things he did and the love he had for them. He enjoyed dining out for ribs and Utica greens. Barbecuing was his thing, but only if Bert relayed to him all the things he needed as he called them out to her. He made flaky fried fish and tender, tasty fried chicken, and he did it with love which meant that the coating and the seasonings would stay on! Ever the optimist, Johnny was always one to advise that “things were going to be alright”. Johnny is survived by his wife, Bert; his children and their loves, Myron and Doris Henry, John Christopher Bembry and fiancé Honor Rizzo, John Dorian Bembry, Shannon Marie Bembry, and Rebekka Lynn Bembry and her cat, Thunder; grandchildren, Tanesha, Hassan, Justin, and Jordan; Aleana, Mikael, and Lela Grace; several great-grandchildren; siblings, Mary and Joshua Woodson, Juanita Watson, Marcel and Jennifer Bembry, Daniel Bembry, and Judi Bembry; a host of nieces, nephews, great-nieces, great-nephews, cousins; and in-laws, James Engram, Pearl Thomas, and Qunnion and Christine McClean. He was predeceased by siblings, Rose Wynder (Roosevelt), Ozell Bembry, Johnnie Mae Bembry, and Almedia Bembry, and sister-in-law, Nellie Boykins (OD). He was also predeceased by his mother-in-law, Pinkie Engram, with whom he shared a loving relationship. The family is grateful to the doctors and staff at MVHS at St. Elizabeth Medical Center for their compassion and understanding at a traumatic time. The empathy they provided made a difference. Thanks to his work family, especially Julie Byrne, from HR. They all showed such love and respect for his family. Johnny’s legacy will live on through his organ donations. Visitation will be held Wednesday morning from 10:00 - 11:30 at the Eannace Funeral Home, Inc., 932 South St., corner of Hammond Ave. Due to current restrictions, we will be operating at a reduced occupancy. We ask for your patience as we try to accommodate those coming to support the Bembry family. Johnny’s Home Going service and Celebration of Life will commence on Wednesday morning at 11:30 at the funeral home immediately upon conclusion of visitation. Face masks are required and social distancing and contact tracing will be implemented. A Zoom link active between 11:00am-12:00pm will be available upon request of the Bembry Family. Donations in John’s memory may be made to the Central Association for the Blind and Visually Impaired (CABVI) online at https://www.cabvi.org. Envelopes will also be available at the funeral home. Interment will follow graveside in Forest Hill Cemetery. During this time of social distancing that we are all experiencing, please take a moment to connect with Johnny’s family through the “Memories” section of his obituary. Our prayers go out to all as a sign of our continued support. “I am not getting older. I am getting better.” Cold Sweat by James Brown (1967) youtube.com/watch?v=B615TiDdjUc

The family of Mr. Johnny B. "John" Bembry, Jr. created this Life Tributes page to make it easy to share your memories.

Send flowers to the Bembry family.