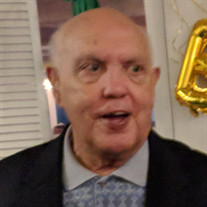 UTICA - Mr. John A. Voce, age 90, passed away on Thursday, October 15, 2020 at MVHS at St. Luke’s Healthcare with his loving family by his side. Born in Utica on December 2, 1929, John was the son of the late Frank and Elizabeth (Ransom) Voce. A proud veteran of the United States Army, John honorably served his country during the Korean Conflict. On June 12, 1954 he married the former Virginia C. Chgles with whom he shared a loving union of 66 years. A longtime employee of the General Electric Company at the French Road location, John worked as a Tinsmith, the position from which he retired after many years of service. A devoted family man, he always gave his time and talents to others. He was a man of great humility whose life revolved around the needs and love of his family. He was a a man of quiet strength, a loving patriarch who provided for his family. Civic-minded and patriotic, John was a member of the Knights of St. John, and the New Hartford American Legion Post #1376. He had a passion for the sport of golf, and was a member of the General Electric Golf League, and the Roselawn Golf League winning the league’s championship with his sons as partners, numerous times. In 1988 he was inducted into the Utica Bowling Hall of Fame, and won a past City Horseshoe championship with his brother Eugene, a competition hosted by the firefighters. He meticulously cared for his Cadillacs, and all 8 of them were unique and special! At one time, John was a parishioner of St. Mary’s Church on South Street, and more recently a communicant of St. Anthony & St. Agnes Church where he humbly helped serve Mass on the Church altars for many years. John is survived by his wife, Virginia; his daughter and son-in-law, Johanna and LeRoy Guyer; his sons and daughters-in-law, Michael J. Voce and very special friend Joanne Di Pietro whom John loved and respected, Brian and Robin Voce, and Peter D. and Elaine Voce; grandchildren, Andrew and Katie Voce, Kayla Voce and Scott Wilson, Brian Voce, Jamie and Antonio Zenzillo, and Santina and Jon Peters, and Fallon, and Matthew Voce; great-grandchildren, John Anthony; Myles; Makayla; Leonardo; and Lillian; and his sisters and brothers-in-law, Jane and Jack Townsend, and Maureen and John Prumo. He also leaves his nieces, nephews, great-nieces, great-nephews, cousins, and in-laws, Samantha Voce; Joan Voce; Michaelene “Micky” Trombetta; and John and Florence Sadowski. He was predeceased by his brothers and sisters-in-law, Joseph and Frances Voce, William and Jean Voce, Eugene Voce, Robert A. Voce, and Donald and Lana Voce; sisters and brothers-in-law, Frances and Harry Kates, Gertrude and Bill True, Regina and Howard Jessmore; brother-in-law, Richard Trombetta. The family will honor and commemorate John's life at a private time. Relatives and friends are welcome to attend John's funeral service and Celebration of Life which will commence on Wednesday afternoon at 1:00 at Anthony & St. Agnes Church where his Mass of Christian Burial will be offered. Face masks are required and social distancing and contact tracing will be implemented. Interment will take place in Holy Trinity Cemetery at the convenience of the family. During this time of social distancing that we are all experiencing, please take a moment to connect with John’s family through the “Memories” section of his obituary. Our prayers go out to all as a sign of our continued support.

The family of Mr. John A. Voce created this Life Tributes page to make it easy to share your memories.

Send flowers to the Voce family.