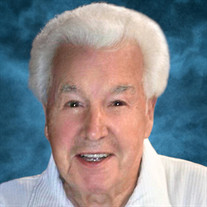 UTICA - Mr. John J. Scarfo, age 94, departed peacefully on Sunday, February 2, 2020 at the Masonic Care Community with those he loved most in his heart. Born in Utica on December 9, 1925, John was the son of the late John M. and Alice (Marino)... View Obituary & Service Information

The family of Mr. John J. Scarfo created this Life Tributes page to make it easy to share your memories.

Send flowers to the Scarfo family.