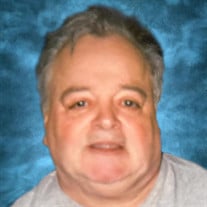 UTICA – Mr. John Joseph Salvo, age 77, passed away unexpectedly due to Covid complications on Wednesday, December 8, 2021. John was born in Utica on June 3, 1944 to the late Rosario and Margaret (DeTullio) Salvo. Here, he furthered his education by attending MVCC, where he studied A/C and Refrigeration, as well as receiving a certificate for “Major Appliance Repair” from the college. John would go on to hold various positions locally throughout the years. Post-studies, John also joined the US Air Force by which he served his country for four years; he was a veteran who was always proud of his country. At one time, John was married to the late Diane E. Sakowski, and to that relationship came the blessing of two children. He was all about family – his entire family – and loved spending quality time with them. John especially delighted in spending time with his beautiful granddaughter. Family time was constantly improved by John’s wonderful sense of humor. In his younger days, John was considered by many to be a “free spirit.” He was known for enjoying a good time, and was lovingly referred to as “Scotchie.” As the years passed, John displayed a consistent streak: he always “told it like it is.” He lived life with no regrets. John particularly enjoyed spending time with his K-9 companion named Hobo, whom he loved dearly, and would happily reminisce about when given the chance. Additionally, John was a football fan who rooted for the Dallas Cowboys, as well as a follower of horse races; he was drawn to all the excitement found at the track. A very spiritual man, John believed in the Catholic Creed. He is survived by his beloved children, his daughter Dana Marie Salvo, and his sons and their loves John R. Salvo and Renee Schultz, and Brian and Danielle Pizzo. John will be fondly remembered by his grandchildren Aiden Siguenza, Ella Rose Salvo, and Austin Weber. He was preceded by his sisters and brothers-in-law, Fanny “Faye” Bianco, Katherine “Kaye” and Anthony Cannistra, Margaret “Bunny” and Victor Nole, Sr., Marie B. and Alfred T. “Al” Giglio, Josephine M. “Josie” and Benedetto “Benny” Carcone. John leaves behind his brothers Rosario “Russ” and Yvonne Salvo; Daniel A. Salvo, Sr. and his late wife Lamya “Lammie” Salvo; Paul R. and Cheryl Salvo. He was also preceded by his brother and sister-in-law, Anthony “Tony” and Mary Salvo. John will be held in the hearts of his nieces, nephews, great-nieces, great-nephews, and cousins, especially John Fanelli; as well as his in-law John Bianco; and his cherished friend Larry Cicigline. The Salvo family would like to extend their gratitude to John’s niece and nephew, Benita and Keith Eisenhutt, for their loving care and compassion. In keeping with John’s wishes, there will be no visitation. The family gratefully accepts donations made in his honor to St. Jude’s Children’s Hospital, online at https://www.stjude.org/donate. Relatives and friends are respectfully invited to attend John’s Memorial Mass of Christian Burial on Saturday, January 15, 2022 at 1:00 at St. Mary of Mount Carmel/Blessed Sacrament Parish, 648 Jay St., with Military Honors conferred by the US Air Force. Regardless of vaccination status, face masks are required in the church, to remain in compliance with the county mask order.

UTICA &#8211; Mr. John Joseph Salvo, age 77, passed away unexpectedly due to Covid complications on Wednesday, December 8, 2021. John was born in Utica on June 3, 1944 to the late Rosario and Margaret (DeTullio) Salvo. Here, he furthered his... View Obituary & Service Information

The family of Mr. John Joseph Salvo created this Life Tributes page to make it easy to share your memories.

Send flowers to the Salvo family.