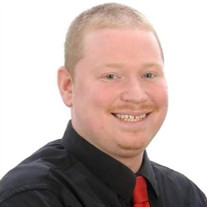 UTICA - Mr. John Joseph “J-Dub” Pasho, age 34, passed away unexpectedly on Sunday, November 8, 2020 at his home. Born in Utica on January 22, 1986, John was the son of Bobby J. Pasho and Karen (Flaherty) Pasho Goodson. He was a graduate of T.R. Proctor High School/Class of 2004 and was active in the ROTC program. Also, at age 16, he was matriculating at MVCC taking college classes for credit. He continued his studies at the Utica School of Commerce and upon graduation attended SUNY Institute of Technology where he received a Bachelor of Arts degree in Computer Science & Business Management. While he was employed full time at the Bank of America, John was concurrently completing his college courses, and proudly earned his Associate degree. He subsequently held a position at Enterprise Corporation. He loved his job and was promoted to manager with the responsibility of overseeing the Syracuse Station. He was elevated again to Branch Manager in Rome, and the past 2 years he held the title of Fleet Manager at the Syracuse Airport. He had outstanding managerial skills and mentored many people along the way. He paid forward his blessing and generously offered his honest advice in making fair decisions and doing the right thing in any situation needing arbitration for the customer and the company. He was the voice of reason, patience, and wisdom which made him a perfect fit in this profession. He was respected and appreciated by his supervisors at the firm and was proud to be a member of the Enterprise family. John was the bond that held everyone together. He was wise beyond his years, compassionate, and dependable. His self-esteem was high and he had a smile on his face often interpreted as a smirk. He was sensitive, not only to his own needs, but to others’ as well. He was an analyzer and would rethink things many times over. He could certainly be witty with quick responses, sometimes laced with sarcasm. Thus, he was known as the ‘funny guy’. As a son, John was unique. He shared his happiness and was there for his parents and his siblings as well. His grandmother, the late Sarah, was a great maternal influence in his life. He adored her and they shared the same values. As a father, he spent quality time with his children and was available anytime they needed advice or assistance. Because he loved his kids above all, being involved in their lives was paramount, and co-parenting was so important to him. “J-Dub” enjoyed his hobby as a rapper, and his lyrics were quick witted and in sync with the rhythm of his rap music. He was very gifted in the technical aspect of music production and was versed in recording and re-editing his songs. Karaoke gatherings made him feel great, and his performances were outstanding. His rap group took part in challenges, and he performed at the Utica Auditorium and local venues. He was good at the grill, but he often grilled so intensely that the charcoaled, crispy, crunchy results were too tough to eat, although his efforts were appreciated! He was knowledgeable and current in the world of sports. He was a fan of New York Yankees baseball and Boston Celtics basketball. He was a true-blue San Francisco 49ers fan and served as the commissioner of two Fantasy Football Leagues for nearly a decade. He also played in a Softball League with his buddies. John is survived by his parents, Bobby Pasho, and Karen and longtime companion Richard Borruso; his children, Adrianna Danielle, John J. Jr., and their mother, Susan Beirmaster; and Alexander Lucas and his mother, Megan Marhaver; his siblings and their loved ones, Eric Pasho, Jessica Pasho and Alan Jones, Krista and Joseph Raiano, Kayla Treen, Jennifer Austin, and Bobby Anderson. He also leaves his uncles and aunts, Michael and Rebecca Flaherty, John Flaherty, Theresa and Kevin Edwards, Cristy Pasho (with whom he shared his entire life and had a wonderful relationship), Patty Pasho, Torrie Paninski, and Susan and Jim Tracy; nieces and nephews, Marissa Madera (his goddaughter), Ariyah Pasho, twins Joseph, and Anthony Raiano, Jewelanna Jones, Addison Pasho, Alan Jones Jr., and Joseph Cavo Jr.; many cousins, especially Sarah Flaherty who was a huge part of his life, Antoinette Flaherty, Kevin Jr., Brandon, and Stephanie Edwards, Chelsea, and Marissa Flaherty, and Janice Perry; and the many great friends with whom he shared an amazing friendship; and his best friend, Matthew P. Sutch. He was predeceased by his maternal grandparents, Sarah E. Yeomans and Ralph A. Pasho; paternal grandmother, Mariela Paninski; an uncle, Patrick Pasho; infant niece, Makarah Madera; and nephew, Angelo Jones. The family is grateful to the members of Enterprise Corporation for their compassion and understanding during this difficult time. It made an incredible difference. John’s Mom’s side of the family, the Yeomans, were such a comfort and support, not only to Karen but to their entire family. Visitation will be held Monday from 4-6 at the Eannace Funeral Home, Inc., 932 South St., corner of Hammond Ave. Due to current restrictions, we will be operating at a reduced occupancy. We ask for your patience as we try to accommodate those coming to support the Pasho family. John’s funeral service and Celebration of Life will commence on Monday evening at 6:00 at the funeral home immediately upon conclusion of visitation. Face masks are required and social distancing and contact tracing will be implemented. Interment will take place in St. Agnes Cemetery. During this time of social distancing that we are all experiencing, please take a moment to connect with John’s family through the “Memories” section of his obituary. Our prayers go out to all as a sign of our continued support.

The family of Mr. John Joseph "J-Dub" Pasho created this Life Tributes page to make it easy to share your memories.

Send flowers to the Pasho family.