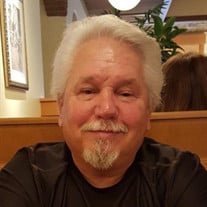 UTICA - Mr. John N. Maunz, age 71, passed away peacefully in his sleep on Sunday, March 22, 2020. At the time of his passing his loving family was in his heart. Born in Buffalo on October 11, 1948, John was the son of the late Alfred “Bud” and Angeline “Angie” (Talerico) Maunz. A proud veteran of the United States Army, John honorably served his country during the Vietnam War. On June 2, 1990 he married his soul mate, the former Kathleen R. “Kathy” Delia, with whom he shared 29 years of marriage. As a couple, they were inseparable. John is survived by his wife, Kathy; his daughter and son-in-law, Katharine Maunz and Peter Hawkins; two adored grandchildren, Sophia Bon, and Dorje Bon; brothers and sisters-in-law, Alfred “Buddy” and Mary Maunz, and Mickey and Cindy Maunz; sister and brother-in-law, Cheryl and Ray Doolen. He will remain in the hearts of his in-laws, David A. and Wendy K. Delia, and Robert J., Sr. and Julie A. Delia. He will be remembered by his nieces, nephews, great-nieces, and great-nephews who were all so special to their Uncle John; his goddaughter, Jacqueline and her husband John Carbone who were truly special in the lives of John and Kathy. Family and friends were everything to John. He had special memories of when his loved ones gathered, especially family picnics with his cousins. He was beloved by his aunts and uncles, those living and those who have preceded him. He was predeceased by his father-in-law and mother-in-law, Nicholas A. and Minnie (Peters) Delia; and sister-in-law, Gail Ann Delia. Kathy extends special thanks to Bill Liberatore, a friend to John for over 30 years; and to Nurse Susan for her compassion and prayers. Due to current health conditions and regulations, his wife has chosen to delay his Celebration of Life to a time when all can gather to honor his memory. During this time of social distancing that we are all experiencing, please take a moment to connect with John’s family through the “Memories” section of his obituary on this website. Our prayers go out to all as a sign of our continued support.

The family of Mr. John N. Maunz created this Life Tributes page to make it easy to share your memories.

Send flowers to the Maunz family.