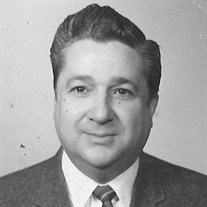 N. UTICA - Mr. John P. Giglio, age 95, passed away peacefully on Saturday, January 18, 2020 in the comfort and dignity of his home with his loving family by his side. Born in Utica on June 7, 1924, John was the son of the late Frank and Concetta (Cortese) Giglio. He attended T.R. Proctor High School then enlisted in the United States Army/Air Corps where he honorably served his country during World War II stationed in the European-African-Middle Eastern Theater of Operations. On August 27, 1962 he married the former Ida Heuberger with whom he shared 57 years in a wonderful marriage that included many years of adventurous traveling. They were aligned in their hearts and minds, and were always together. John worked for the Internal Revenue Service (IRS) for over 30 years at the Utica and Binghamton offices. He and Ida lived in Binghamton for 17 years, and upon his retirement they returned to Utica to be closer to family. The years that followed were filled with travels to unforgettable places which provided them with many memories. Though John was quiet and gentlemanly by nature, he appreciated levity and humor. He enjoyed dining out and pampering his beloved Ida. He was a hard worker, a great provider, and a family man,… and to lend him a helping hand, Ida mowed the lawn! John was raised by parents who provided him with family values that made him a good son, and the best husband. He looked forward to gatherings at Christmas Eve at his home, and was proud to have loved ones together. Although not blessed with children of their own, he shared his love and patience with his nieces and nephews which made his life most complete. He also was fortunate to share love with the next generation as well. The Lord lived in John’s heart and his heritage. John enjoyed the excitement and fine dining at the Casino, and sat patiently while his wife shopped. He also read the Observer-Dispatch every day, every page, and completed the crossword puzzle with no assistance from a dictionary! John is survived by his cherished wife Ida; his sister, Katherine Ellis; niece, Lorraine and Wayne Pittman and their son Chad; and his in-laws, Siegrid “Sig” and George Baranowski, Doris and David Gould; and his nieces and nephews, Gregory Baranowski and Kim Zenobio, Jeffery and Patrecia Baranowski, Steven Gould, Marie and Thomas Maxwell, Shila and Eddie Caheely, Cindy and Lee Parker; and his great-nieces and great-nephews. He was predeceased by his brothers and sisters-in-law, Joseph and Frances Giglio, and Alfred T. and Marie Giglio; his sister and brother-in-law, Sara and Joseph J. Carucci; and his in-laws, George A. Ellis, and Martha and LeRoy Lawson. The family is grateful to Dr. Steven LaGrant and his entire staff, Dr. Manzurul Sikder with whom John shared a wonderful rapport; and the personnel of Hospice & Palliative Care who tended to John the last several days. It was the devotion and concern of his wife Ida which allowed him to remain at home with her by his side. Thanks also to Theresa and Scott Wojnas, concerned neighbors who were like family. Visitation will be held Thursday from 4:00-6:00 at the Eannace Funeral Home, Inc., 932 South St., corner of Hammond Ave. John’s funeral service and Celebration of Life will commence on Thursday evening at 6:00 at the funeral home upon conclusion of visitation with Military Honors conferred. Committal Prayers and Entombment will take place in Resurrection Chapel Mausoleum at Holy Trinity Cemetery at the convenience of the family.

N. UTICA - Mr. John P. Giglio, age 95, passed away peacefully on Saturday, January 18, 2020 in the comfort and dignity of his home with his loving family by his side. Born in Utica on June 7, 1924, John was the son of the late Frank and Concetta... View Obituary & Service Information

The family of Mr. John P. Giglio created this Life Tributes page to make it easy to share your memories.

Send flowers to the Giglio family.