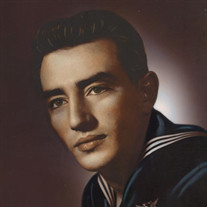 UTICA - Mr. John J. Catera, age 90, passed away on Tuesday, June 23, 2020 with his loving family by his side. Born in Utica on April 17, 1930, John was the son of the late Joseph and Cosimina (Marco) Catera. He attended T.R. Proctor High School and Mohawk Valley Technical Institute (MVTI) where he studied Real Estate and Business. A proud veteran of the United States Navy, he served his country with honor from 1948-1953 as a Naval Air Crewman. It was in St. Agnes Church on June 16, 1962 that he was joined in marriage with the former Josephine Lupia. They knew each other’s strengths and weaknesses and were great partners in raising their boys. When Josephine was taken ill, John devoted himself to caring for her until her passing on April 11, 2019. They were married for 57 years. After a successful career as an aircraft mechanic at Griffiss Air Force Base, John retired in 1986. Throughout his adult life and into his retirement years, he enjoyed helping others. He was known throughout his neighborhood as a handyman willing and able to repair or build anything. He preferred being productive, and even at his final home at Cedarbrook, he maintained the Veteran’s garden. As a father, John loved, taught, and volunteered his wisdom whether solicited or not. He was a neat, organized, no-nonsense guy, and everything had its place. A proud, but humble man, he was nostalgic when he shared narratives of days past. He was transformed into a new and improved “Pop” when the grandchildren came along! He had the pleasure of being the primary confidant for his oldest grandsons, and the younger grandkids had the pleasure of being his captive audience. He spent a “boatload of time” on Oneida Lake and enjoyed the ownership and maintenance of their summer camp. From 1994 to 1995 he and his friend Pete Greco spent time building a 26-foot wooden, handcrafted motorized boat that they navigated from Sylvan Beach to Destin, Florida. He was one of the founders of the Social Athletic Club, and he also elonged to several American Legion Posts. John is survived by his sons and their loved ones, John P. Catera and Dawn Zbytniewski, Marc J. and Antonietta Catera, and Thomas A. and Trista Catera; and his grandchildren, twins Alexander Catera and Nicholas Catera; Gabriella Catera and Tyler, Marco Catera; Dominic and wife Jessica, and Brady. Also left to remember John are a sister and brother-in-law, Pauline and Robert Grande; a brother and sister-in-law, Joseph and Marilyn Catera; many nieces, nephews, great-nieces, great-nephews, cousins; sister-in-law, Shirley Catera; and dear friend, Mike Heinrich. He was predeceased by his brothers and sister-in-law, Santo and Carmela Catera, and Michael V. Catera, Sr. The family extends their thanks to the staff of Cedarbrook who provided John the opportunity to become a part of their household, he found all to be delightful and entertaining; and the personnel of Hospice & Palliative Care who provided compassionate care while tending to John during his final journey. Visitation will be held Saturday from 10:30-12:30 at the Eannace Funeral Home, Inc., 932 South St., corner of Hammond Ave. John’s funeral service and Celebration of Life will commence on Saturday at 12:30 at the funeral home upon conclusion of visitation with Military Honors conferred by the US Navy. Due to the current restrictions, we will be operating at a 25% occupancy. We ask for your patience as we try to accommodate those coming to support the Catera family. We will only allow ten people into the building as ten people exit. Face masks must be worn and contact tracing will be implemented. In lieu of flowers, memorial donations in John’s honor may be made to Hospice & Palliative Care, Inc. for their continued professionalism to the community, online at https://hospicecareinc.org or by mail to 4277 Middle Settlement Road, New Hartford, NY 13413. Entombment will take place in Calvary Cemetery Mausoleum at the convenience of the family.

UTICA - Mr. John J. Catera, age 90, passed away on Tuesday, June 23, 2020 with his loving family by his side. Born in Utica on April 17, 1930, John was the son of the late Joseph and Cosimina (Marco) Catera. He attended T.R. Proctor High School... View Obituary & Service Information

The family of Mr. John J. Catera created this Life Tributes page to make it easy to share your memories.

Send flowers to the Catera family.