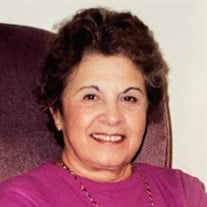 MARCY – Mrs. Joan A. (Pontoriero) Infusino, RN, age 87, passed away on Saturday, May 7, 2022, in the comfort and dignity of her home. Born in Utica on December 24, 1934, Joan was the daughter of the late Girolamo “Jerry” and Anna (Kliss) Pontoriero. She was a graduate of Utica Free Academy and went on to study at St. Elizabeth’s School of Nursing. She successfully passed her boards and became a NYS Registered Nurse. On October 19, 1957, Joan married a man who honored and adored her: Vincent R. Infusino, Jr. As a wife, Joan could claim responsibility for all goodness and graces and was truly the model of a devoted wife. The couple, who shared a loving marriage, would spend nearly 43 years together as husband and wife prior to Vinny’s passing on September 25, 2000. Joan enjoyed a prestigious employment opportunity prior to raising her family: she held a role as a private Surgical Nurse with Dr. Smith—a mutually respectful working relationship. This position was then followed by several part-time positions at Faxton Hospital as the 3rd Floor Charge Nurse, at Genesee Nursing Home, and at St. Joseph’s Nursing Home. Joan held tenure working with Dr. Silverman, MD, who was an Ear, Nose, and Throat Specialist. Her work family meant the world to Joan, and many had remained friends with her to this day. Although Joan had a career of her own, her family was her greatest priority. She always made sure, wherever possible, to arrange her schedule around her parenting responsibilities, which were of the utmost importance to Joan. She was a constant presence in her children’s lives and was a good example of a mom who loved being present to raise a family. Joan lived in the hearts of her children and worked to remain in their lives as a constant example of goodness. When the grandchildren came, Joan prioritized spending time with them and was a dependable and exuberant babysitter. Whenever a celebratory occasion came about in the lives of her loved ones, she made sure to send cards. Joan even made a special tradition with each grandchild! Grandma Joan will always remain in their hearts. Joan was an avid NY Yankees Fan. All who drove past her home on Albany St. knew a Yankee fan lived there, as the fan memorabilia could not be mistaken! Joan also enjoyed her daily walks, which she found were excellent for her wellness and a good release of energy. Another hobby in which Joan indulged was shopping; she was a wise and seasoned shopper who was always mindful of looking out for the perfect gift. Joan particularly delighted in buying shoes and watching jewelry sessions on QVC. Above all, Joan practiced kindness and was sentient. Joan was a prayerful person who was often seen with her book of saint and prayer cards by her side. She took solace in remembering others and their needs in her prayers and filled her prayer book to the brim with petitions. Joan truly took refuge in the Lord and counted on His love to guide her. She was a longtime member of Historic Old St. John’s Church. Joan is survived by her children and their spouses, Sharon and Brian Scala, Mark and Karen Infusino, Anita and James Hoffman with whom she resided, and Scott Infusino. She was preceded by her daughter-in-law, Beth Infusino, who she was truly devoted to in her time of need. Joan will live on in the hearts of her grandchildren, Vincent R. Infusino; Bryan Scala, Jason Scala; Christopher Hoffman, and Justin Hoffman; as well as her great-grandchild, Bailey Infusino. She will be fondly remembered by her mother-in-law, Gloria Mary Infusino. Joan was predeceased by her siblings and their spouses, Marie and George Fitzgerald, Genevieve and John Getter, Pat and Vincenza Pontoriero, and Dolores and George Hameline. She leaves behind numerous nieces, nephews, great-nieces, great-nephews, and cousins. Joan was blessed to share her life with some long-time, wonderful women, Mary Alice, Sharon, and Geri. The family would like to extend their gratitude to Shari Miller, who was in Joan’s home and assisted her beautifully; thanks are given to her for keeping Joan well-cared for. A heartfelt gratitude is extended to Joan’s son-in-law, Jim, who was truly an incredible guy to her on so many levels. Relatives and friends are respectfully invited to attend Joan’s funeral service and Mass of Christian Burial, which will commence on Saturday morning, May 14, 2022, at 11:00 a.m. at Historic Old St. John’s Church, 240 Bleecker St. There will be an opportunity to greet the family at the conclusion of the Mass. In lieu of flowers, memorial contributions in Joan’s honor may be made to the Alzheimer’s Association online at https://www.alz.org/donate; envelopes will also be available at the service. Entombment will take place in Resurrection Chapel Mausoleum at Holy Trinity Cemetery at the convenience of the family.

The family of Mrs. Joan A. (Pontoriero) Infusino, RN created this Life Tributes page to make it easy to share your memories.