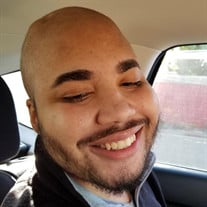 UTICA - Mr. Jiovanni P. “Jio” Collins, age 22, passed away on Thursday, August 12, 2021 after a courageous battle with a rare cancer. At the time of his passing he was in the comfort and dignity of his home with his loving family by his side. Born in New Hartford on July 26, 1999, Jiovanni was the son of Tiffany (Collins) Mays and he knew the love and guidance of his “dad” LaQuan Brown who raised him. He attended Watson Williams Elementary School, Donovan Middle School, Frankfort-Schuyler Central School, and graduated from T.R. Proctor High School. Jiovanni was employed at Rosario's Pizzeria East Utica and also worked for a brief time at Walmart in North Utica. Jio was a sweet and affectionate soul who was always smiling. He was an honest individual who was sometimes known to be quite spunky with his words. He was blessed with a witty sense of humor and could easily provoke laughter from anyone. Jio was an extremely outgoing people person with a strong spirit that constantly exuded positive vibes. He was an animated guy who would often break out in a dance! As a son, he was a good kid, of good character, who strove to make good choices in his life. Jio was truly his “Mommy’s Baby” and they loved each other unconditionally; this was one of the greatest treasures in Jio’s life and his mom often told him how proud she was of him and that he was her favorite person in the world. He was admired by his Dad for his strength as a person. His “Mema” was his best bud who he spent a great amount of time with; she completely admits to spoiling her grandson and has no regrets about it! Jio was an avid gamer who had a controller in his hands since he was a young boy. He was proficient and the skills of gaming came naturally to him. He could ultimately be found playing his favorite game “League of Legends”, wrapped up in a blanket like a burrito, and there was no stopping him! Time spent with his family was of utmost importance to Jio and he especially enjoyed many memorable trips to water parks, specifically Water Safari, and amusement parks where he was not a fan of the roller coasters! He loved the water, enjoyed swimming, and the feel of warm sand, all which gave him a sense of relaxation. All Jiovanni wanted was to live his life to the fullest, but when his illness took away some of his crucial abilities, it was apparent to him that it was time to conclude his journey in life at home, in peace and comfort; his family lovingly respected his wishes. Toward the end, Jio’s Uncle Dorrel gifted him a Buddah, signifying the 8 parts of the path to wisdom and the end of suffering; this brought Jio great comfort and solace. It is often said, “not all heroes wear capes”, and Jio’s loved ones found him to be quite a hero, indeed. Jio is survived by his parents, Tiffany and LaQuan; his Mema, Karen Collins; and his Papi, Miguel Rivera. He also leaves his brothers, Michael King, Jr., Dashawn Collins, Alexander “Katz” Collins (Jazmine), Nino Brown, Carlito Brown, and Javier Brown; many nieces, especially Nevalise, nephews, with the anticipation of a nephew who will carry his name; many cousins, aunts, uncles including Paul Hance (Amanda); great-aunt, great-uncle, and his maternal grandfather, Fred Collins (Gail). Jio was blessed with a close group of friends that he considered additional members of his family, Sephian Carter, Alexandria “Alex” Domenica, and Berry Blair. The family extends their heartfelt appreciation to all of the outstanding caregivers who tried everything possible to make Jio comfortable and gave him the best care imaginable; his primary care physician, Dr. Kenneth Visalli; the staff of SUNY Upstate Medical University, especially Dr. Michael Galgano, the entire staff of Memorial Sloan Kettering Cancer Center, especially the M4 Unit who were amazingly compassionate and diligent in caring for Jio, particularly nurses Sandra, and Lauren, and Jessica Goggin, NP; and Dr. Ruham Alshiekh Nasany who was part of Jio’s care at both hospitals. His final journey was made possible by the staff of Hospice & Palliative Care, Inc., especially nurse Crystal whose care could not be paralleled. Visitation will be held Thursday afternoon, August 19, 2021 from 4:00-6:00 at the Eannace Funeral Home, Inc., 932 South St., corner of Hammond Ave. A celebration of Jiovanni’s life will commence on Thursday evening at 6:00 at the funeral home upon conclusion of visitation.

UTICA - Mr. Jiovanni P. &#8220;Jio&#8221; Collins, age 22, passed away on Thursday, August 12, 2021 after a courageous battle with a rare cancer. At the time of his passing he was in the comfort and dignity of his home with his loving family... View Obituary & Service Information

The family of Mr. Jiovanni P. "Jio" Collins created this Life Tributes page to make it easy to share your memories.

Send flowers to the Collins family.