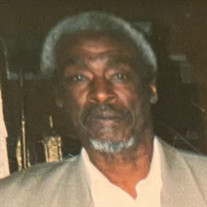 UTICA - Mr. Jerome Price, Jr., age 79, went home to be with the Lord as he passed away on Thursday, September 23, 2021. He was blessed with the love and care of his sister, Elder Mary Hawkins, for many years. Born in Kingstree, South Carolina on August 8, 1942, Jerome was the son of the late Jerome Sr. and Viola (McClain) Price. At a young age, he and his family came to Utica where he attended Potter Street Elementary School and Brandegee School, and graduated from Utica Free Academy/Class of 1960. A proud veteran, Jerome enlisted in the United States Army upon graduation and served his country with honor stationed stateside as well as in Europe for over 8 years. His heart and life were entwined as one when he married the former Mary Hines who has since passed away. They were a joyous couple who successfully blended their family, and this made his life complete. Jerome missed Mary to the day he passed away. Jerome worked at Chicago Pneumatic as an assembler, and later on he attained a job with the Department of Public Works for the City of Utica where he was a valuable employee until he was unable to work. Friendly and outgoing, everyone knew him, especially when he sat on the porch and folks going by would shout greetings to him. He was a generous soul, so giving and kind hearted, always reaching out to people if they needed help, without ever being asked. He enjoyed solving crossword puzzles and playing solitaire. Back in the day, especially when his dad encouraged the family venture of fishing, they would travel to Cranberry Lake in the Adirondacks and enjoy a delicious dinner after preparing and cooking the day’s catch! He also enjoyed watching football on television where the high-energy tackles and touchdowns always got his attention and reaction. He shared the love of the sport with his nephews as phone calls went back and forth during the games. Special days were celebrated at each other’s homes. He fondly recalled the cookouts in their back yards and the park ~ he loved these special times! He was the “grill master”, and when he couldn’t do it any longer, he watched his nephew step into that role, …but he always missed doing it himself. Jerome was a member of the House of God Church. He was graced with a good, close-knit family life and he was proud to be a father-figure to the children who never forgot him. He spent his golden years residing with his sister and brother-in-law, and each of them felt a sense of comfort in watching over one another. Jerome is survived by his siblings and their spouses, Ellaree Sims, Elder Mary and Ezel Hawkins, Deborah and George Minor, and Nathaniel and Gloria Price; his children, Lee Ardis Nevith, Anthony Nevith, and Vickie Nevith, a host of grandchildren, nieces, nephews, great-nieces, and great-nephews. He was blessed with the uplifting support of his friend, Joe Adams, who faithfully visited and called on him. He was predeceased by his siblings, Laura V. Price, Jonarhay Price, Benjamin Joe Price; brother-in-law, Claude Sims; and his nephews, Ezel “Poncho” Moody, David E. Moody, and Eric De-Arnold Hawkins. The family is grateful to Jerome’s physicians, nurses, and staff at MVHS at St. Luke’s Healthcare Center for their compassionate care. Visitation will be held Friday, October 1, 2021 from 10:00 – 11:00 at the Eannace Funeral Home, Inc., 932 South St., corner of Hammond Ave. Jerome’s Home Going Service and Celebration of Life will take place on Friday at the funeral home upon conclusion of visitation. Interment will follow graveside in Forest Hill Cemetery with Military Honors conferred by the United States Army.

UTICA - Mr. Jerome Price, Jr., age 79, went home to be with the Lord as he passed away on Thursday, September 23, 2021. He was blessed with the love and care of his sister, Elder Mary Hawkins, for many years. Born in Kingstree, South Carolina... View Obituary & Service Information

The family of Jerome Price, Jr. created this Life Tributes page to make it easy to share your memories.