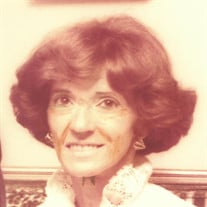 UTICA – Mrs. Jean Dolores (Capraro) Flemma was welcomed into Heaven on April 18, 2022 by the loving arms of her husband John and the rest of the dearly departed Flemmas who passed before her. Her loving son was by her side as her breath gave out peacefully. Aunt Jean, as she was known to the family, was born in Utica on May 3, 1935, to the late John “Jake” and Mildred (DeMola) Capraro. She graduated from T.R. Proctor High School/Class of 1952 and was the salutatorian of her 1954 class at Alfred University, where she obtained her associate degree. On March 3, 1965, Aunt Jean married the Honorable John E. Flemma, eloping to romantic Elkton, Maryland for a whirlwind ceremony that led to 53 loyal and joyful years of marriage prior to his passing on May 5, 2018. Jean immediately embraced her role as a Flemma, and joined the family as a valued member: a devoted and supportive wife, a caring mother, and a bright, energetic inspiration to the rest of the family. Never more than arms’ length away from her husband, she battled through three campaigns with him, worked the room at every civic function, and augmented her husband’s service to the law by becoming a real estate agent with Joyce Taurisano Realty Co., rightfully earning for herself the respect and admiration of the legal community. Aunt Jean had two athletic endeavors in life: skiing and golf. Though she was courted by John at such places as Whiteface and Sugarbush, she merely tolerated skiing for the sake of her expert skier husband and son. Golf, however, was another story entirely: Aunt Jean both loved and lived golf to the nth degree. She was known to play as many as 27 or even 36 holes a day – one round with the Ladies Auxiliary and the other with family. Traveling with her family, she played such famous courses as Harbour Town, Kiawah Island Ocean Course, Caledonia, Oak Hill, and The Concord’s “Monster” Course. Aunt Jean also participated in one of the final tournaments of the great women’s champion, Babe Zaharius Didrickson. She followed the pro tour religiously, fervently rooting first for Jack Nicklaus, then for Phil Mickelson. She even opined in print about golf courses in her son’s magazine and news articles, and members of the Golf Writers Association of America still chuckle at her – in print no less – hilariously mispronouncing golf star-turned designer Forrest Fezler’s name, writing “Tell Furry Fozler I said the par-3s are too long.” Of course, no highlight reel of Aunt Jean’s greatest hits is complete without retelling how she stole the show at her and John’s 50th wedding anniversary: “I can’t believe how fast 50 years went by.” Showing true valor in the face of adversity, she cared tirelessly for her husband during his long final illness, seeing to his every need, no matter how exhausted she might be. A particularly religious woman, Aunt Jean was a member of St. Anthony and Agnes Church, as well as St. Mary of Mt. Carmel/Blessed Sacrament Parish. She was also known to enjoy a steaming cup of the freshest gossip, usually supplied with wild inaccuracies and much hyperbolic exaggeration by her sister Susan “Sally” Pilawa. Jean is survived by her son, attorney and writer Jay Flemma, Esq.; her brother, John and his wife Arlene Capraro; and myriad nieces and nephews, including Barbara and Gregory Kadrlik and their daughter LaTricia Andersen and her husband Nicholas, Patricia and Renato Donato, Jr., George M. Flemma and his daughter Kate, Ed Wiatr, Jr., and the late Maryanne (Flemma) Wiatr who was also her goddaughter; her beloved great-niece, Anne Marie Wiatr Rockwell, her husband Paul, and their son Paul, Jr.; her nieces and nephews, Jeannie, Julie, and Ben Flemma; her great-nephew Ed Waitr III and his wife Hailey; her nieces and nephew, Ed and Terri Flemma, and Jill Flemma; and her cousins, Gene and Kelly Ciccolella, Paul Ciccolella, and Judy Ciccolella; Hon. Jason D. Flemma and Alana Herbowy Flemma and their children. Relatives and friends are respectfully invited to attend Jean’s Mass of Christian Burial on Monday, April 25, 2022, at 11:00 a.m. at Mary, Mother of Our Savior Parish, Lourdes Campus, 2222 Genesee St.; the family will receive visitors at the end of the Mass. Donations in honor of Jean’s memory may be made to St. Jude Children’s Research Hospital, online at: https://www.stjude.org/donate/donate-to-st-jude; envelopes will also be available at the service. Interment will occur at Calvary Cemetery at the convenience of the family.

UTICA &#8211; Mrs. Jean Dolores (Capraro) Flemma was welcomed into Heaven on April 18, 2022 by the loving arms of her husband John and the rest of the dearly departed Flemmas who passed before her. Her loving son was by her side as her breath... View Obituary & Service Information

The family of Mrs. Jean Dolores (Capraro) Flemma created this Life Tributes page to make it easy to share your memories.

Send flowers to the Flemma family.